What? You don't have designer, one-of-a-kind toilet paper? 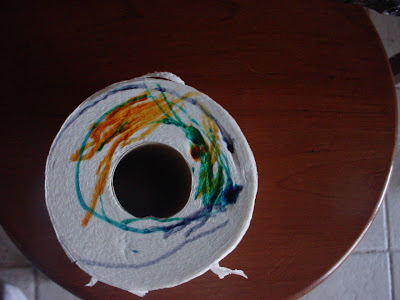 Safiya got into the groceries...her markers know no bounds...

I've been getting into the sewing again. Remember the blanket that I wanted to finish in a week? Well, it's a week late, but in my not-so-great defense, a week and a bit late is definitely better than two years late, yes? It was sitting there, and I kept rearranging the fabrics I had picked out, but it just wasn't working. I was being stubborn. I really liked all the pieces, but how was I going to make it work? Ah, by letting it go...once I let go and excised some of the fabric (which reminds me of an excellent English lit prof who told us to write our essays and then go back and take out half the words...), there was an aha! moment and now I'm really pleased with the results. This is the front: 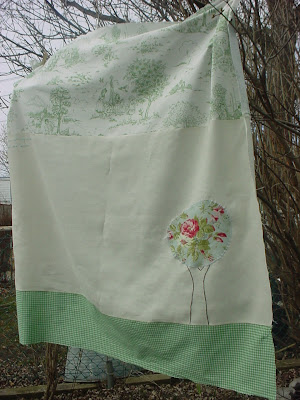 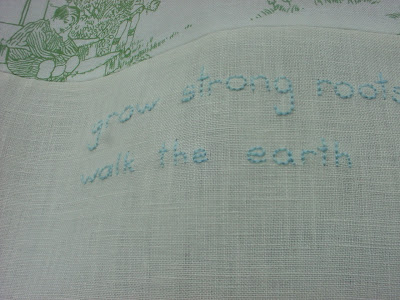 Obviously it's not finished yet, but I've had the opportunity to concentrate on it for a bit lately, so it will be done soon :-) It's my first blanket that's not recycled sweaters and my first applique, about which I was a bit nervous - I kept thinking about those sci-fi movies when the hero/ine shoots the floor all around themselves and it gives out beneath them, thus evading impending doom - figured my poor tree was going to escape out of the blanket when I was done. I still think it needs something, but not quite sure what. The saying is something that popped into my head when I was doodling. Not really contradictory - gotta have deep roots to be strong enough to stride about, no?

Oh, and totally 100% inspired by Two Trees. The simple but deft way in which words and craft are combined by her hands is beautiful.
at 14:59

such superb detail! and yes, groundedness is key to making great strides...

That blanket is just gorgeous (as is the designer toilet paper)!

OK, I am up at 5:30 a.m. (why?) and reading every word of your blog. I love it. I completely resemble your post about being a patient yet impatient with yourself person. And how sewing makes its way into that. And now this blanket! I am working on my first quilt and realized over the past weekend that it is just missing something. It seems to be having a bird theme to it. I think it is missing a tree like yours. Can I borrow your idea? I promise to return it to you with an appropriate link. Love, love your blog.