Where No One Has Gone Before (Yay for Philae!)


Like many across the globe on Wednesday, we waited with baited breath for the stuff of science fiction to become reality. It wasn't on our radar until a day or two before, when news articles started to trickle in about this crazy mission that looked like it would work: getting the Philae lander from the Rosetta spacecraft onto Comet 67P/C-G five hundred million kilometres away hurtling through space at crazy speeds. What? What?

We watched the ESA twitter feed and blog, read up on the Q&A, and got really excited. To watch knowledge, money, technology and talent being used for the truly fantastic as an adult is a privilege*. To watch the live feed of the scientists reacting when Philae finally landed was something else**. I was young when the shuttle program started, so I never really experienced the anticipation and thrill of us people getting our collective shit together to do a science first in this way.


** Nothing like the movies, in an excellent way. No soundtrack, no intense close-ups of intense faces, lots of people just sitting around in control, waiting. It was a hilarious reminder of how much our expectation of these things is shaped by movies.
* Although, as an adult I also got to experience Chris Hadfield singing David Bowie's Space Oddity in the International Space Station, which counts, I think:


I was a trekkie as a teenager (Star Trek the Next Generation, please, and anything after) and still am, I must confess. As an impressionable 13-year-old in a small town, Star Trek shaped my moral universe in a way that eclipsed my religious upbringing, fed my craving for the big questions of life, and started my life-long crush on Captain Picard (of course). Alas, this was before the internet, so I was a solitary trekkie girl, unaware of the larger trekkie culture and very aware that in the real world at that time, that kind of stuff was for boys.

But it was the sense of possibility that plucked at my heart strings (not with Picard, with science....unfortunately?) And here we are, using planets' gravity to fling a spacecraft across our solar system to rendezvous with a lump of rock a gazillion kilometres away on a ten-year-mission.


Safiya's real excitement started when she realised that the Rosetta mission started when she was born and here she was, getting to witness its culmination. It was also fueled by her own recently discovered love for Star Trek the Next Generation (her favourite character is Data). After Philae's release I kind of lost it when they said its main thrusters had failed. Its main thrusters had failed like many a Star Trek shuttle craft. Be still my beating heart :) Upon which Safiya reminded me that she hadn't seen that happen yet (we've only just started Season Two in our nightly family STNG marathon), so she didn't get it. But that equipment failure was also part of the thrill. This was a real problem for the mission: what were they going to do? Science in Action, right?


In the end, all I've got is thanks. Thanks for a world of connection where geeks can find other geeks and discuss the things they love a little more easily. Thanks for a world where Safiya can wear the Lord of the Rings patch on her backpack with pride (I'm guessing a Star Trek insignia is soon to follow). Thanks for Nerdfighters, and Neil deGrasse Tyson and Cosmos, and where the aftermath of a scientist making a bad decision is this and this.

So thanks, ESA Rosetta mission. Thanks from this one little person in Toronto for the privilege of watching you guys do your stuff and experiencing for real where no one has gone before (couldn't help it :)

The Best Kind of Day 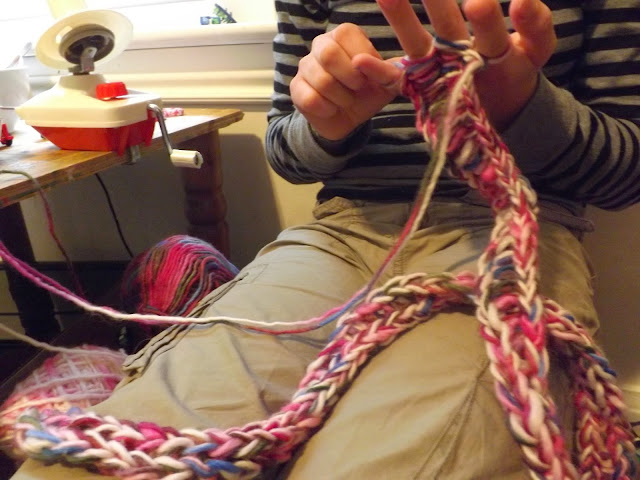 "This is the best kind of day" she said, contentedly.

Upon request, Safiya had asked me to teach her to crochet, again. Except I made a fatal mistake. I gave her the cheap cotton yarn to learn on, which only ended in frustration, obviously. You'd think I would have remembered that the pleasure is not only in the learning and the accomplishment, but in the materials.

"What about finger knitting?" She was game, especially after I pulled out my most favourite yarn - a beautiful creamy slubbed merino that I had never done anything with - and her eyes lit up. "Are you sure? Are you sure I can use this?" Well, I wasn't doing anything with it, was I?

And so that's how the above proclamation came about. Zinadine playing trains, Safiya knitting away, and me sitting on the playroom floor, reading a new-to-her book aloud. Ever since Safiya really began to read on her own, she hasn't been that interested in us reading out loud, but she commented on how nice it was, especially since she had something to do with her hands. We were supposed to do multiple things that day, obligatory things, but it just didn't seem to be the right day for it. 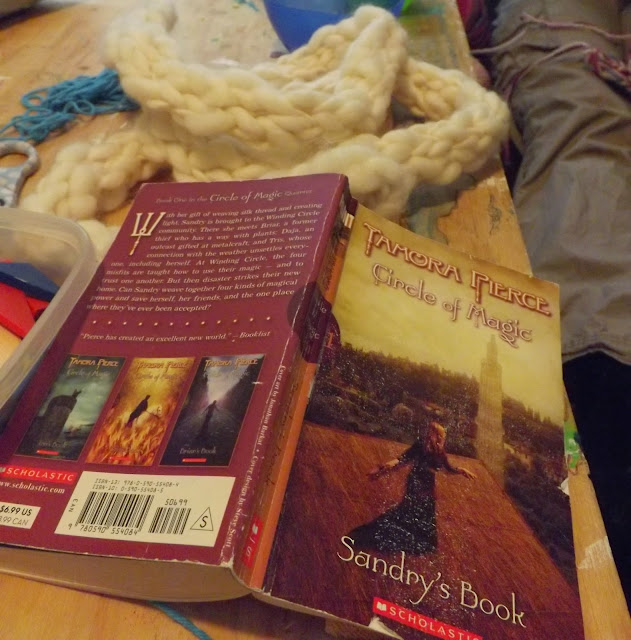 As I get older, I listen to that voice a bit more. The best kind of days are the ones that you make for yourself. To purposefully step outside of the push and pull of the calendar and the necessary things of life is a skill that has been hard to learn. I don't mean just hanging around and shirking, although that's fun sometimes too :) It's more understanding the value of what is happening rather than running away from what should be happening, if that makes any sense? Stepping aside without guilt or feeling the need to make an excuse is hard, but important.

Is going to lessons important? Yes. Is it more important than learning a new skill? Maybe, maybe not. Maybe I wasn't interested in that particular value judgement that day. I asked her what she wanted to do and she made a choice. Will Safiya remember that she missed karate class? Nope. Will she remember that we sat together and learned something new and read a new book and were content? Wholeheartedly yes.