Welcome, Scarlet Avery. We can't wait to meet you! 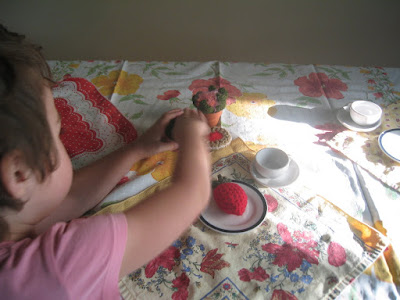 This morning it was imperative that we have a tea party, first thing, with the loot we brought back from the Kids Trunk Show yesterday. It was at the workroom, and packed full of local artisans who had made things just for kids, so this of course was a dangerous situation (check out Karyn's blog make something, for details on vendors including some cool interviews). I swapped a playcape with Kelly of Leilabug Toys for the awesome anarchymobile, perfect for our friends' baby due soon, and Shannon Gerrard had come up with delectable crocheted treats (hence the tea party this morning), and I finally got to meet Tania of tania (makes sense, I know), which was one of the first blogs I ever started reading. I was very excited and tried not too talk to much and make an ass of myself (hard to do most days, especially when ravenously hungry and hopped up on illicit coffee). 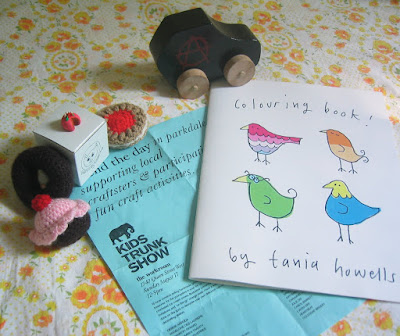 And do you see that ridiculously cute teeny-tiny cake? From the youngest vendor at the fair, Ella. She makes genius little sculptures, each with its own story, and she's a cool gal to boot. Organised, laid back, and getting right into it - she was teaching other kids to make sculptures throughout the show. Very together for 10 years old.

As for the four-year-old in our midst, this was her custom-made display: 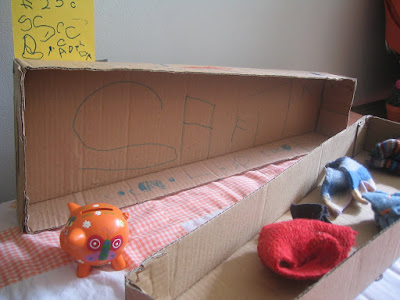 That was the "trunk" she wanted. She decorated it, worked on the sculptures, made the sign (noticed the upped price from 2 cents to 25 cents? that's quite the price hike! :-) and then proceeded to accost anyone who walked by to see if they wanted to buy one of her items. I had visions of Covent Garden, a la "My Fair Lady", and I was pretty proud of her. Oh, and notice Safiya's newest prize possession, a cactus from Shannon: 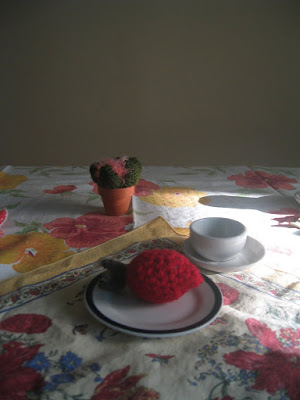 She had talked about it for months, earning money, spending it on ice-cream, then saving up again, and then Shannon, in true good character, swapped her the cactus for Safiya's last two sculptures. That's good people.

My own trunk was packed full, cheerful, overflowing, and slightly throw-together, kind of like I've been feeling lately: 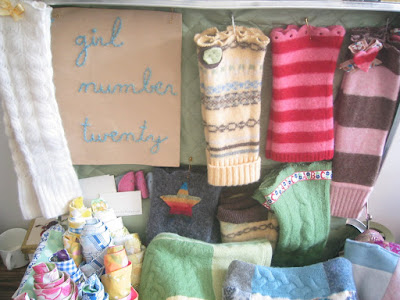 Sold a few things, including: 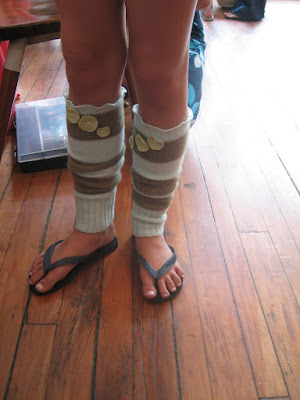 had a good afternoon (except for an incident involving Mr. S. arriving mid-afternoon carrying a bloody-mouthed Safiya in his arms after an almost-bit-through-her-bottom-lip-little-fall in the park - she's o.k. - lots of noise and blood, very small trip), met new people (some first-time-vendors, which is always cool), and came home really tired, although not as tired as Mr. S., who had lugged all my stuff half way across the city.

So now today is cleaning up and catching up. You'll notice that there are pictures again. It's a new-to-me camera, and I'm happy, but it's not my camera yet. I'm still getting used to it and am in the awkward elated-hesitant stage. Even though I don't have a choice now, I still look at it and say, "Well, we'll see. If you behave, you can stay." So, we'll see......

Oh, and for your delight, when I was looking for the link to Ella's etsy site, I found this bit of awesome-ness by the girl herself: 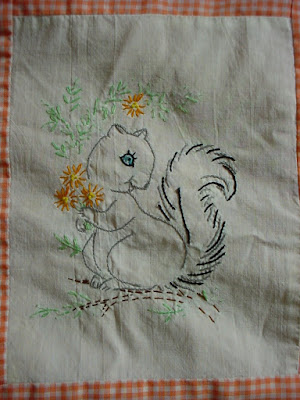 A crazy number of people dropped by here yesterday - all thanks to the wonderful Sew, Mama, Sew blog. They accepted my excitement about the dresses I re-fashioned for Safiya and posted it on the latest Create & Celebrate post - how exciting! If you haven't already, go take a look at all the incredibly wonderful things that people have been makng - so much inspiration! If you've come by from over there, hi there, I'm so glad you came by!

So, to please your eyes even though my camera's broken, I'm sharing a couple of pictures I had from before of my latest crazy-couple-dollar-thrift-find: 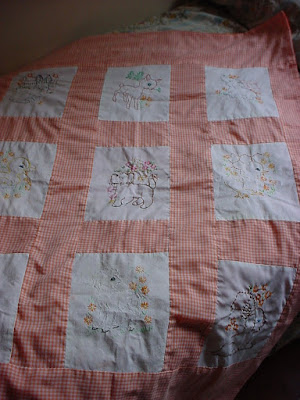 It's so sweet and someone took a lot of time embroidering all those adorably happy animals (I love the squirrel!). My brother-in-law has finished law school and so now our other bedroom is empty. Safiya is excited about having a space of her own, but "not to sleep in". Nope, we're not going there yet. 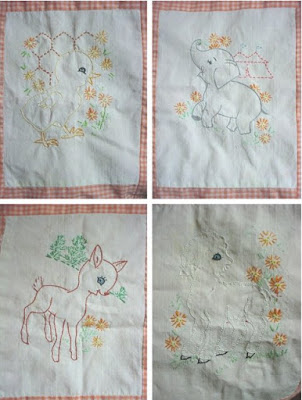 My new favourite breakfast is popped amaranth. It's so ridiculously good, nutritionally, but I've been having a hard time finding uses for it except plain, even though it's a bit gooey when cooked like a grain. It's yummy popped, though.

I burnt my first batch because the instructions I found said "highest heat possible". They obviously hadn't met my stove. So medium heat is just fine. When you pour the amaranth in, it should start popping almost right away. I found a little demo (halfway down, under "Amaranth Porridge"). It only takes a minute to make, so easy and quick, perfect for first thing in the morning.

Plain is good, or with milk, like teeny-tiny rice krispies. It's a silly way to start the day.

Especially if you forget to put the lid on when you're popping it.
at 07:13 2 comments:

My New Career as an Illustrator Awaits... 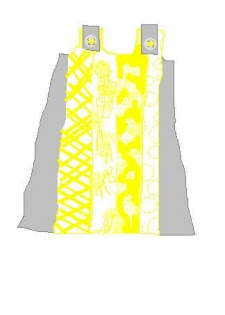 My hand hurts. My right hand. With my left I've eaten almost an entire batch of granola (which I made for breakfasts - ha!) so that I could concentrate. (We don't have a scanner, hence the awesome picture in MS Paint :-)

That's the dress. Some yellow scraps pieced together for the front, the rest is a grey linen. In case you can't see it - ahem - it's partially lined with a seventies-baroque-ish grey and yellow and lime green flower print. I'm really loving the yellow and grey - it was seeing Soulemama's dress that prompted me to finish Safiya's, which was languishing on a recently-thrifted footstool in the studio which has, of course, become just another flat surface on which to store fabric.

I'm tempted to do a "finish-a-project-a-day" kind of August, but a) I don't have the commitment and b) no camera, so that would be kind of mean to anyone reading this, 'cause really: "look at the beautiful quilt I finished and then had to draw in a really awkward manner to get the point across"....

Safiya has a new cute dress that I finally finished. It is grey and yellow, which you cannot see because the camera was left outside during a downpour. I am waiting for it to dry out. Has this ever happened to anyone else? Do digital cameras come back from the dead? Anybody got a second-hand one they want to part with?

Weird. Blogging without pictures is not very satisfactory, and I guess my business is dependent on that little machine. Etsy certainly is, eh? Nobody would buy anything without those cute little pictures...Can you believe catalogues used to be drawn?

And, on a totally different note, it would help if I'm going to mail packages if they actually have addresses to go to :-) And since there are exactly 3 stories of generosity in the comments, I've decided to give a package to each of you. Yay! So, will Rachel, Alexis, and Tracey please stand up and email me your addresses? Thanks!