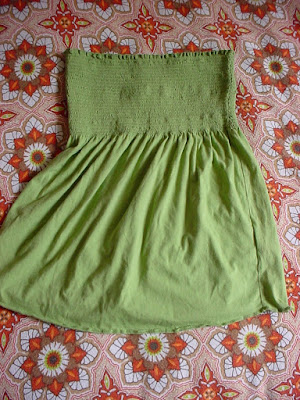 Every once in a while I quickly go through my clothes and put things in the donation bag. Lately though, I've become a bit more mean. Yes, there's a perfectly good shirt of Mr. S.'s that he doesn't dig anymore in there, but you can't have it because the buttons can go in the button box and the rest can make rags. Stingy, I know, but might as well get as much use out of it as possible.

So there was the top in the picture up there, which was an early-pregnancy-friend-gave-me item that seriously? Awesome on a hot summer beach day when the pregnancy boobs are so big that they can be seen from space, but these days squishing is hardly to their benefit ;-) I quickly shortened the elasticized bodice (just cut the top couple of inches off in-between rows of stitching), took the side seam in, added ribbon for straps, and hey presto! 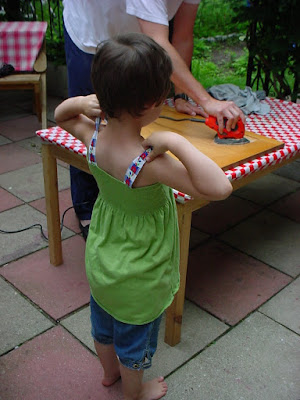 On a roll, I got daring with this: 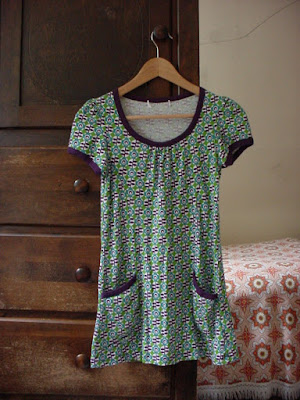 Love the pattern, love the cut, but too small. I'm not sure if doing the following is officially sanctioned altering - is this allowable? Apparently, 'cause it worked! 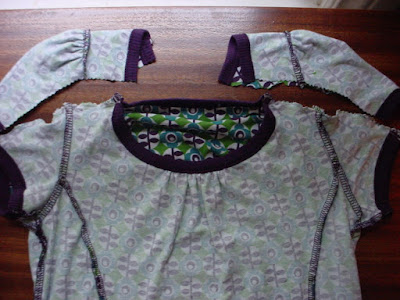 I put the t-shirt on Safiya, got her to stand still (!), pinched it up on top of her shoulders until I got a decent fit, marked one side with a safety pin 'cause that's all I could manage given the level of wriggliness, and then turned it inside out and pondered for a minute. 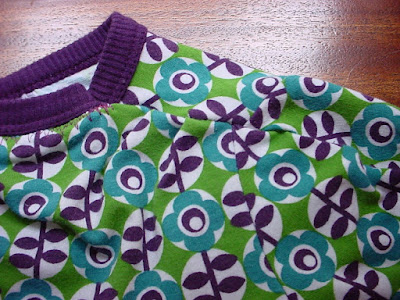 This is a view from the back of one of the shoulders. The trick, which I almost got, is to line up the neck binding and the sleeve seams from front to back. There was extra fabric on the back, so I just pleated it as I sewed the seam, following the original line of the shirt (which yielded a perfectly fitting sleeve - I was pretty amazed!) It still puckered a bit across the back of the neck, so I just folded it under and stitched, as you can see.

O.k., the following is my doctored version (the red arrows are where I lined up the old seams, which are in white, and the green line is where I sewed the new seam - does that help, or am I making things more complicated?) 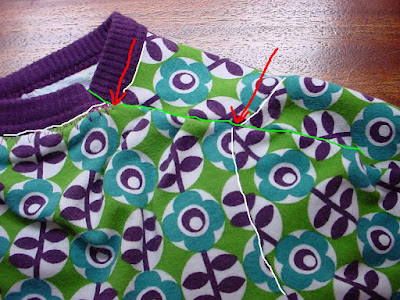 Anyway, not the most glamourous of jobs, but it created, it all of 5 minutes (minus the pondering), a perfectly serviceable dress: 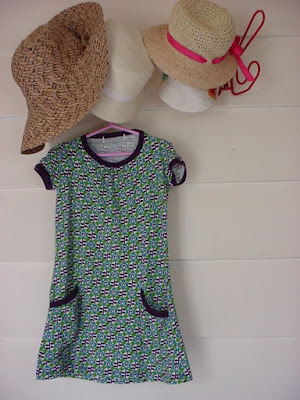 I'd love to show you a picture of her wearing it, but most of the time today she was sticking her hands in the pockets and pulling it up over her head. I can, however, show you what happened at the end of the day: 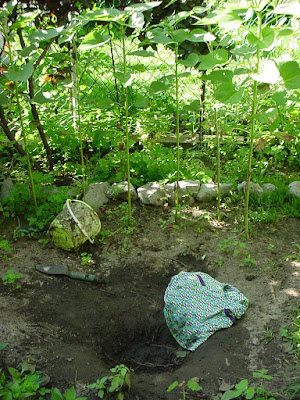 That's our vegetable "garden". There's herbs, sunflowers, and sunchokes in there somewhere. And the often played in but rarely photographed mud hole. With the dress as accessory.
at 16:48

awesome work, marnie! you've dared to go where i've only imagined... i have yet to graduate from kids pants made from linen shirts, but now am completely inspired!

lovely, and I love the fact you named your daughter Safiya :)