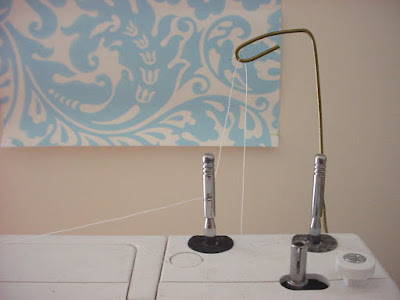 I tried to convey how excited I was about this to Mr. S. using terms he could understand, but to no avail. "That's nice!" He tried, he really tried to be happy for me, but there was still the unspoken "whatever, crazy lady" behind his words :-)

This is my spool graveyard. I've gone through a lot of thread. Does anyone have an idea of what to do with these? I guess somehow load them up again, eh? Anyway, a couple of days ago I ran out of white. And off-white. And beige. 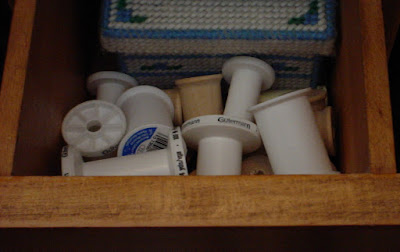 The halcyon days of simply buying new thread, the days before I realised what I sewed with ended up being swallowed by sea life, are long gone (and that includes the dyes - I'm starting to think, if I wouldn't want to drink it, it shouldn't get thrown out...I know, crazy talk....)

Thread on spools is hard to come by second-hand. And I haven't graduated yet to buying organic thread. But I have scored a couple of cones of thread for sergers, in the hopes of figuring out what to do with them. Ages ago I remember seeing how to rig them up on a non-serger machine on someone's craft blog. I have a million bookmarks - did I bookmark it? Of course not. So, after some searching last night, I came up with a combination of this idea posted on instructables and this. And for all you out there going, "well, a thread stand, of course..." I did not know that thread stands existed, so there. 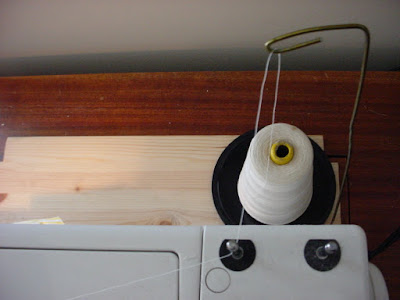 The hanger was bent with pliers and tacked down with some electric-cord-hold-in-place-thingies from Ikea, and I just placed the cone on the spindle and put it underneath. 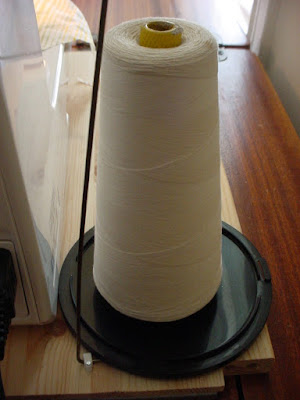 I use the ultra-classy 2 liter pop bottle with bottom cut out, myself. Stand the spool at the bottom, thread the thread through the narrow opening at the top, and it's the el-cheapo version of a thread stand.