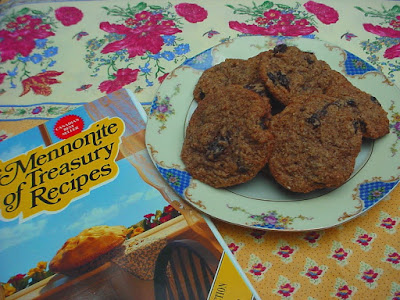 The vegetable dishes section in the revered cookbook above are heavy on cheese and half have meat in them. Butter and eggs are applied liberally throughout, and the idea of a vegetarian is an aberration of nature....

But these things must be understood within their context, surely. When asked to submit recipes years ago, these ladies would have submitted their most proud, their most delicious. Recipes that indicated bounty and celebration (think eggy paska), not thrift (bacon fat sandwiches, anyone?)

And it is within that frame that I remember the savoured foods of my childhood. Tummy-filling borscht (tomato based, not beet), flaky perishky with savory or sweet fillings, platz, hand-cut kielke, deep fried rollkuchen, and, of course, Mennonite sausage with cream gravy and wareniki - oh, and that staple of faspa (late afternoon lunch) - zweiback (double buns)...my grandmothers' food lavished well-being on us with its freshness and evidence of hand hard work. Although, the Mennonite Treasury of Recipes, like any good 50's cookbook, has it's share of ingredients such as condensed milk, soup-in-a-can, and jello. Why not? Thrift, although unspoken, was a virtue bred in the bone.

Today I did the unthinkable, and I may have created a new mission for myself. On a substituting roll, I veganised my Grammy's raisin cookies, the recipe for which is contained in the Mennonite cookbook. It's not a traditional Mennonite food, but for me it reminds me of Grammy's house, which is authentic enough for me. So here I proudly present my first vegan "Mennonite" recipe:

Mix dry ingredients, including sugar, in a large bowl. Drain the raisins and reserve liquid. Add oil, raisins, vanilla, and ground flax seed mixture to dry ingredients and mix until combined. Add a little of the reserved water until you get a sticky batter (don't overmix).

They turned out great, if not quite like Grammy's, then yummy in their own right. Now, the holy grail for me is zweiback, which, as Grammy told me this morning, "need butter...you really can't make them without butter." But you know what? I just found a recipe that doesn't use butter, and a really neat tutorial on how to make them, 'cause there would be shame in the room if I tried to do this at the side of Grandma or Grammy ;-)

And I'll end with my favourite part of this cookbook, the part that reminds me of the trinity of weddings, showers, and funerals in church basements, the MCC (Mennonite Central Committee - a relief organisation) sale, of youth Sunday suppers, of family reunions and church picnics. 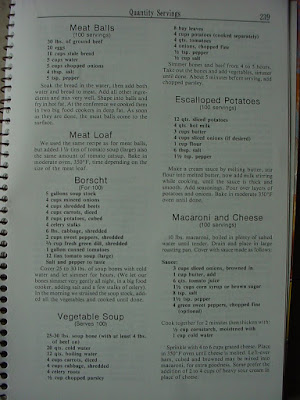 Hey Girlnumbertwenty! Should you ever veganize Rollkuchen, I would be the happiest girl in Germany!!
Greetings from a vegan Mennonite in Germany
Tina

I noticed your last blog post was in 2008. Are you still blogging under this name?

Fastforward to 2021... and we now have https://www.pandorapress.com/store/p284/The_Vegan_Mennonite_Kitchen%3A_Old_Recipes_for_a_Changing_World_by_Jo_Snyder_.html#/

Plus ca change, plus ca meme chose. (The more things change, the more they stay the same LOL!)