It All Started with the Maple Syrup 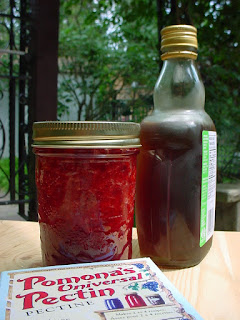 A couple of days ago I was picking up emergency maple syrup from the grocery store close to us (emergency as in, we're going to have pancakes for breakfast tomorrow :-) and I gasped (yes, out loud) when I saw the price.

Food price rises only happen to other people, right? Like a lot (most?) people we kind of keep a watch on how much we spend on food, and we kind of have some debt, not including the mortgage. What happens when the money that needs to go to that debt now has to be diverted to food? We're not there yet, but it's not hard for me to see that path, and I can imagine that some people (especially our neighbours to the south) are already there. 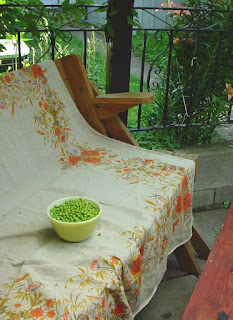 Please note, I am not complaining, because sweet freshly shelled peas straight from the farmer is foods for the gods. We live literally in the middle of the largest city in Canada, and this farmer travels about 100km to bring fresh food to the market. I am not going to begrudge her/him $9.50 for a four quart of peas (which yielded about 4 cups shelled - hard to tell, we ate as we went along :-). My grandmother would be shocked, and I grew up on a farm, so it hurts a little, but did I grow my own peas? no.

But what happens when the cost for that farmer to get here keeps rising? My confession is that a lot of this creates for me some anxiety and a vague sense of unease. Hence the very cheery food posts lately glossing over all that ;-) Actually, it is exactly why there's been a bit more food posts around here. Lately my focus has been my fledgling business, planning to sew more for us, and really buckling down and learning to plan ahead with food and trying to make everything at home. Instead of ordering pizza on a day when Mama and Mr. S. ain't got the energy, I'd like to be able to take something out of the freezer or shelf. That requires planning and budgeting; more than I realised.

So, we made our own jam because not only does it taste waaaaay better, but it costs (and will cost if you figure what jam might cost in a year - ha!) slightly less than buying it. And I love having jam....for the year. And learning skills. Because that's what's important, right Napoleon Dynamite? Skills? 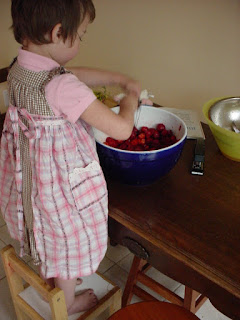 She started off really enthusiastic and then that predictably waned. Safiya's almost four and it makes me glad to see that she doesn't view anything (yet) as a chore. We'll see when she gets older.

It's also been a really bad year for syrup, with the late spring and all. Prices are up to balance what has been a low yield all around.

Will it stop us?

You're right Katharine, it won't stop us, that's for sure :-) My jeans have holes in the crotch? No matter, at least I've got maple syrup! I heard also that because of a couple of low years, the maple syrup stockpile (I want to see that someday) had gotten low, so that's another factor.

And thanks Joanna, we sure will enjoy the jam!

Like they'd ever tell us where that stockpile is!

I've been learning jam-making too. I'm running the kitchen at a kick-ass summer camp, which means I'm also in charge of food education. So each group of kids rotates through the kitchen and I get to do experiments...on the first round we all made peanut butter from just peanuts, and now we're making jam. Third round we all make bread and then eat the classic camp PB&J, free from high-fructose corn syrup and fully hydrogenated soybean oil.

It's funny that I've never made jam before, and now I make it every day.