I have a thing about felt. Real wool, soft, juicy felt. When it was revealed to me that if you shrink wool sweaters on purpose you get this amazing non-ravelling glorious material of substance, I fell in fabric love hook, line, and sinker. Not that it hasn't been rocky sometimes. There have been wrinkles that...just...won't...come...out! 100% merino that turns out a verrry strange texture (why did it do that? why?) And stripes in patterned pieces that end up all bunchy. But it's worth it, every mistake, every odd result, just for the thrill (yes, I said thrill - I need to get out more) of the transformative power of my washing machine, of wondering what I'm going to end up with. That being said, I remember someone mentioning just felting a piece of the sweater first, just to see how it turns out. Now, I've never done this before - I'm more of a all-my-eggs-in-one-basket-turn-it-into-an-omelette-if-it-doesn't-work kind of gal. Here's what happened with those sweaters from Friday: 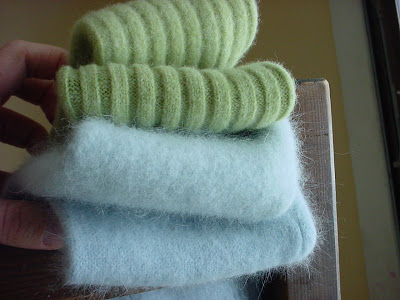 I did do a test run. Which was instructional, but not nearly as fun. The bottom of each colour pair is the unfelted arm (sorry, the light was crappy today, and yes, those are my chapped fingers in the picture) and the top of each is the felted one, which was two rounds in the washer (HOT water, normal cycle, laundry detergent, plus three tennis balls for friction) and then hung to dry. I have put sweaters in the dryer before as well, which helps get a denser felt, but then you have to be careful about creasing. 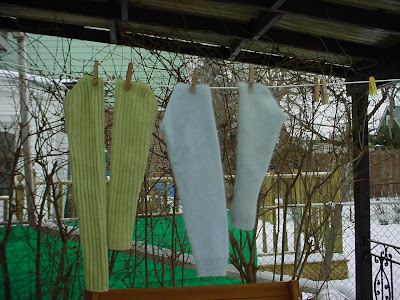 The green is 100% lambswool and the blue is 50% lambswool, 40% angora, and 10% nylon. Warnings ring far and wide about dismal results if you try to felt anything with nylon in it, and I am loathe to include synthetic fibres in my stuff, but the colour was sooo pretty. So I tried it, and the nylon didn't seem to affect the process at all (that still doesn't mean I like you, nylon).

There are many good tutorials for felting sweaters out there, and there are many ways to obtain felt; you can needlefelt from carded wool (which I've never tried) or just buy it (also never tried). For inspiration, there are these true felt mistresses: Fieltromania and Betz White.

The two best pointers I've received are: if you're going to felt multiple sweaters in a batch, put each one in a separate pillowcase (I do that even if I'm only running one sweater because if you don't, at the end of the cycle it looks as if a cat had met its untimely demise in your washer....) and never try to felt "washable" wool (this one I ignored and served me right - it didn't felt, just turned this awful fuzzy, worn too much, left under a large animal somewhere texture)

The knitting? Let's just say I'm using it to show my toddler that when something doesn't work the first time, we try again. "Remember when Mama couldn't figure out the knitting and she started over again? Seven times? That's what we do when we don't get it...we just try again. grrrrr."
at 22:45