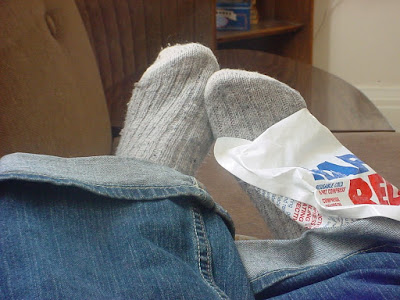 Well, sort of. First of all, thank you so much for your kind well wishes...we endured one-and-a-half weeks of various combinations of the three of us having fever, aches, and coughs (I'm still coughing if someone makes me laugh), and at the end I was just plain old exhausted. And behind. So the past couple of days have been spent catching up on housework, on bills, on correspondence, on just being happy that we're all mobile and happy again, and the weather has been lovely fine, which we've been relishing with glee. So we're on the mend.

Until today when I dropped a giant 3L metal can of olive oil on my foot. Seriously...I'm such a clutz. This is better than fever though, because although immobile, there's none of that bleh-I-don't-even-want-to-think-about-moving-but-I-need-a-
drink-of-water-and-it's-on-the-bedside-table-but-that's-too-far
-to-move-I'll-just-roll-back-over-and-ignore-everything-feeling.

So the only pictures I've got for you today are ones that I can take from the couch :-) First, the awesome sewing basket I picked up at the thrift store a couple weeks ago, which Safiya promptly tried to fill with toys when we got it home, but I've reclaimed it....sort of. There's still building blocks in there somewhere.... 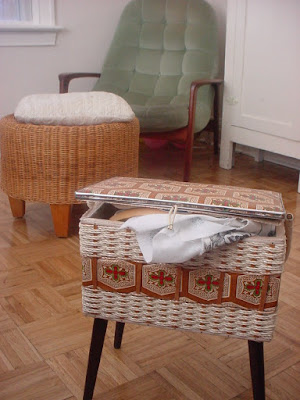 The project inside is a quilt for an overseas cousin's baby, and I'll show it to you when I'm done :-) The other project for the day has been: 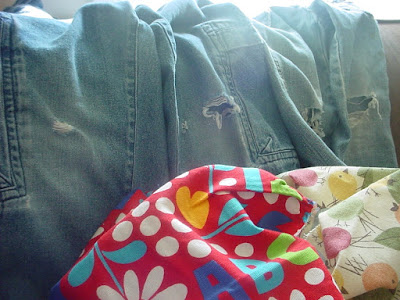 Mending! In keeping with the theme, some sad jeans of Safiya's to go with my sad foot. They still fit just fine, but yes, that's been our kid running around the neighbourhood (in her socks), knees bare to the new spring sun. They'll be good as new, and I love that ABC fabric, which was a skirt found and claimed, just for the fabric. Perfect happy fabric for happy knees.
at 14:58

Yikes about the can falling on your foot! Adore the sewing basket. I've never seen one with legs before!

I'm just noticing that fabric with the birds on it - I have an apron that I picked up at the antique store with similar looking birds that I love. Anyhow, glad you're on the mend, but I'm sorry about your foot!

I don't know how many times I patched my son's pants when he was younger- and always the left knee. He spent a lot of time on that knee while zooming his Hot Wheels on the floor. And when they turned into "floods," I made them into shorts!
(Hope your foot feels better- ouch!!)