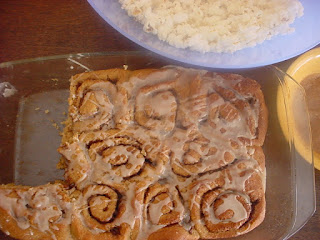 A couple of weeks ago my friend Katharine, she of the newborn third child, returned a baking pan of mine. It was, of course, full of goodness. Because she's that kind of new mom. She's got her priorities straight, man. Me? After Safiya was born I don't remember wearing anything but a housecoat for a while, and for the first six weeks, if I did go out (thank goodness for midwives - they visit you at home), the best I could do was pyjamas. Yes. New mother padding down to the corner store, downtown Toronto, in slippers and pyjamas. My mother was horrified. I argued that since we lived in a condo, technically the street was my backyard...

Anyway, back to Katharine's awesomeness. She had made these cinnamon buns (veganised: Earth Balance margarine for butter, soymilk for cow's) from The Pioneer Woman Cooks. I think the other things in the picture are popcorn and some homemade applesauce that I finally got around to making from the hoard of apples. We had that for lunch....and then just cinnamon buns for dinner....and then first thing the next morning, Safiya came thumping down the stairs with these words:

"Mama, can I have some more of that awesome cinnamon goodness for breakfast?"

And for other food awesomeness (even if there's not a vegan bone in your body :-), check out:
Drooling yet?
at 10:33

Okay, will be checking those food sites soon. Yum!