O.k., so there might be more than one post tonight, as Safiya still has a cold and has gone to bed early and I feel like I have to untangle my thoughts from the week...

First, in my rearranging, I came across an old House & Garden from January 2003. Look at the knitted goodies! That was 5 years ago, before any of what I'm doing now was even percolating in my brain... 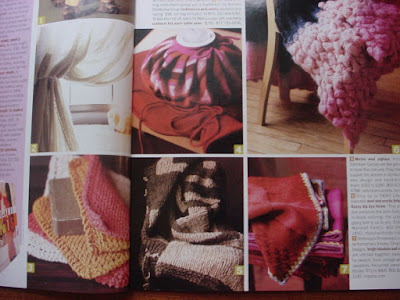 But my favourite by far is the knitted curtains. Aren't they gorgeous? I can't imagine the amount of work they would take, nor the kind of tragedy that would ensue if they ever got washed...no, no....knitting curtains is not in my future. But they sure are pretty.... 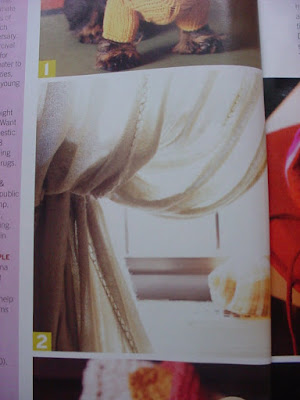 What else? I managed to do some thrifting: 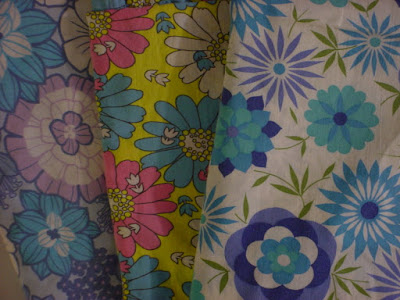 Also we (and by that I mean the royal we :-) have removed the microwave from the kitchen because it was freaking me out that the cordless phone didn't work while the microwave was on. I've dubbed it an "experiment" so that other members of the household don't mutiny. Safiya only occasionally laments its loss because now she has to eat her food before it gets cold. Or so I thought: 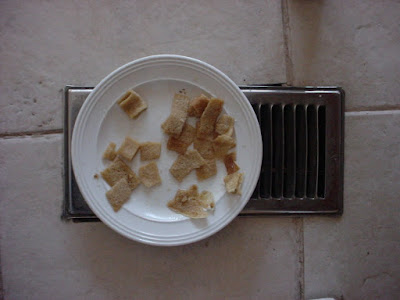 Ha! She also came up with a new way of peeling garlic: 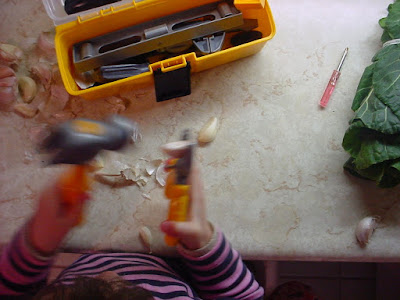 Who am I to argue? Whatever works, eh? Speaking of work, I would have like to do more, but it has been a week of errands, dropping off people at the airport, colds, people having babies (that doesn't really have to do with me, I just had to get it in there - yay Katharine and her family!), and planning for spring and summer craft fairs.

It's application time, and I got up the guts to apply for the Toronto Outdoor Art Exhibit, which, I must explain, is huge, and more art than craft, and I'm really not being humble in saying that I sincerely don't think I will be accepted. I do think, however, that it is good practice for me to go through the requirements of applying, the little write-ups, getting the photos, heeding deadlines. Mostly because I dislike applications, and am not very good at deadlines.

I may have over-compensated on this one, however. On the last eligible day for application submissions, aware that Safiya and I had to meet my mother arriving at the airport at 3:00pm from a vacation, I gave poor Mr. S. a rather perfunctory good-bye as he left in the morning for a conference in Vancouver at the same time as I was madly trying to get this application in. I rushed, lost my work online twice, and we were a little late leaving for the airport...and when we got home it suddenly smacked me that of course the application deadline date wasn't. until. the next. day.

I really worry about microwaves too...We use ours about once a month...but I'm thinking if we use it that infrequently is it worth having at all...