Things Are Growing Around Here 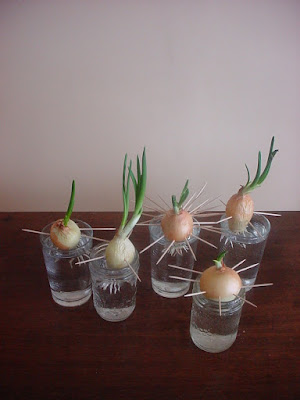 Despite the ridiculous amounts of snow which linger around here, signs of spring are creeping. The sun is warm. Things are sprouting. We heard a robin two mornings ago. Baby birds need their nests ;-) Since the onions were sprouting anyway, we decided to make a spectacle of it - some of them needed more toothpicks than others, evidently.

Our morning routine now involves tending for these little guys: 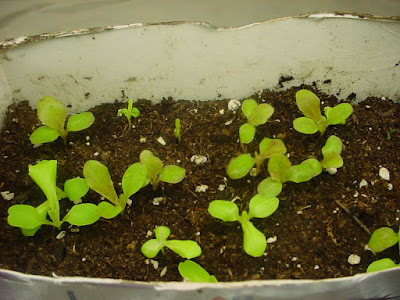 We've got lettuces and kale, and we're seeding tomatoes (as a summer offering for the raccoons) today. Safiya is often the one who stops suddenly in the middle of something and reminds me that we have to water them. It's pretty incredible how fast she's sprouting, too. The days are full with "That's o.k., Mama I can do it." If she falls or bumps, the first thing out of her mouth is "I'm o.k." like she's totally in charge of the situation. My favourite so far is the other morning when we were still in bed and she cuddled up, saying "Mama, you're the warmest spot". It doesn't get much better than that.

We've come into our own with a rhythm around the house. She enjoys working together on chores. And you know what, I don't call it "helping". Once in a while I'll ask her and show I'm in need of help, but otherwise I think it's pretty important in the everyday stuff for her to not be diminished into "helping". And, at three-and-a-half, it's so much easier for me to work on my stuff, too. I have to say, it's great. She's busy, I'm busy, it's all good. Her latest is a fascination with tape: 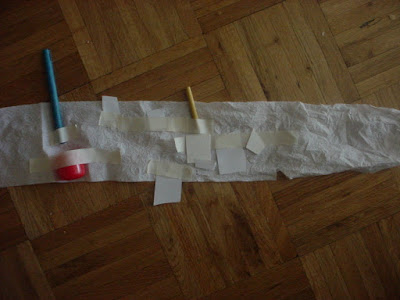 My work for the last little while has mostly been taxes and fighting with the computer (hence the absence) and finally giving in and taking it in. Ugh. I'm of two mind about the whole thing. You know, the whole debilitating/liberating thing. I'm still mulling it over.

But it's good to be back in this space. I missed it! There has been some work, a bunch of craft fair planning and applications for the year (nerve-wracking), and babies arriving or imminent (NOT US! We're not sprouting! ;-) I've got a bunch of quilts/blankets on the go and some new projects. Ahhhhh, back into the spring of things, eh? 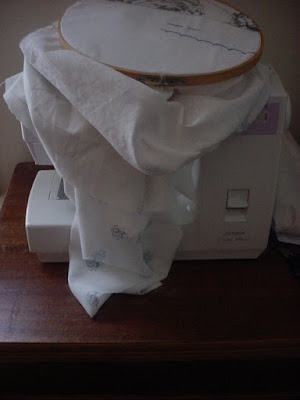 Now, if only the snow would co-operate and go. away! 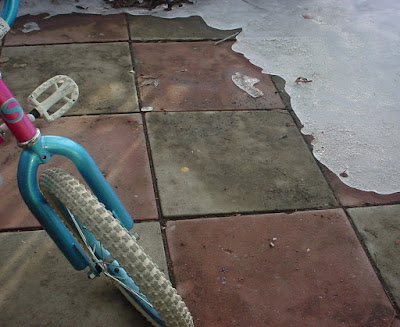 I love your point about the term 'helping' - it's a phrase I often use with my children, but having looked at it afresh...perhaps it is a little patronising.

I love the hair story - and much admiration that you laughed rather than cried.

Oh, we laughed! Way deep down my heart ached briefly for her little girl curls, but she looks like a little imp now, and it's hair, right? It'll grow back. I really want her to grow up knowing firmly that her body is her own and that she's in charge of it.

Examining the words we use and why is so crucial, but I also think that whatever works for you and your family is important - I bet your kids are proud to be their cool Mama's "helper" :-) It's also how you use the word, right? This is what works for us!

You're stronger than me, when Fred cut a chunk out of her hair I cried. I managed to hide it from her but I cried for sure.

Somehow I felt like I made that hair, like it was a part of her like any other and it hurt me to see it gone.