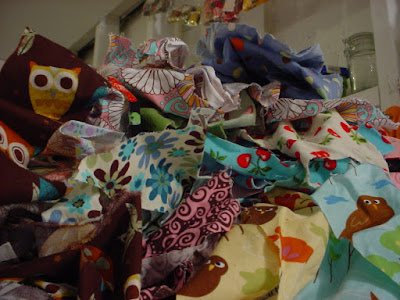 I went to bed at midnight last night. Why? Because Becky came over for a visit, and so she is indirectly the reason of the insane-late-nightness. I say indirectly for as much as I could have probably kept talking until midnight (oh, so sweet adult conversation), Safiya was delirious at having a new person to gambol around, and would not even consider going to sleep until Becky was safely on her way. At which point Safiya promptly fell asleep, mid-late-night-bowl-of-oatmeal-snack mouthful. sigh.

So, indirectly, then. Becky brought with her goodies in the form of a garbage-bag full of scraps, part of a stash that she had recently come by. Read again. A garbage-bag full. I traded her for some of my wonky yarn and a little fabric, but I still think I got the better end of the deal. So it was sitting down there in my craft space....do I go down? If I do, I won't come back up again for a while...do I, don't I?

Of course I did.

Alexander Henry, Moda, Kaufmann...fabrics a thrift-store-second-hand gal like me can only dream of (and I do :-) Mr. S. found me down there again this morning:

me: holding it up in my hands like treasure: "fabric!"

"Yeah, but it's just scraps, what can you do with scraps?"

me: eyebrows raised at this insult to the fabric gods, at which Mr. S. beats a hasty retreat....


What can I do with scraps? HA! And to top it all off, I'm attending Becky's hyperbolic crochet class at The Knit Cafe tomorrow, and immediately after there is a fabric swap at The Workroom....

What a glorious weekend...

p.s. Becky's great to have over....she finds her own sugar for tea, stirs oatmeal upon request, and spins a good yarn...good stuff.
at 18:23

De-lurking to say "hi" - those are some awesome scraps - love those owls!

A garbage bag full? Lucky girl! I'm building my stash, careful to keep it 'hidden' - my husband just doesn't get it!

Oh my... think of all of the trouble.. I mean wonderful projects you can begin now. Oh my... how wonderfully delicious. Isn't it funny how much better other peoples bits are than our own? (Hmmmm.. that sounds wrong somehow.. Ummm..)

i think i got the good end of the deal seeing as how i just delivered the goods. very little of that stuff originated from me, most of it came from laura-jean the knitting queen.

i'm pretty excited about the goodies i got in return for this service, too! which reminds me, i should be sewing...

wonderful your projects.thanks for information.To get more design in weaveron textile click on this link....:http://www.weaveron.com/