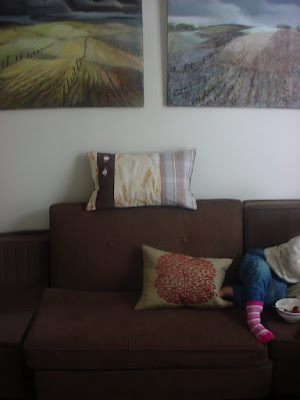 Sarah left a nice comment about the pillow in our living room a while ago (the one with the red tree embroidery above). Which was lovely, and served as a reminder that there is a dearth of pillows around here (really just an excuse to make something :-). It is surprising to me that for people who like comfort (and who doesn't?) we had exactly two pillows in our living room (and both bought from Ikea ages ago). That is just wrong. 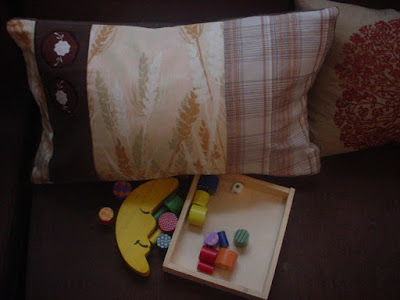 Having made some buckwheat hull pillows for ourselves, I snagged one of the extra pillows from the bedroom, cut it down (kudos to self for doing that outdoors - although it looked like I'd sacrificed a chicken in the front yard - good thing it snowed and covered it all up!) and recovered it in appropriate living room attire. 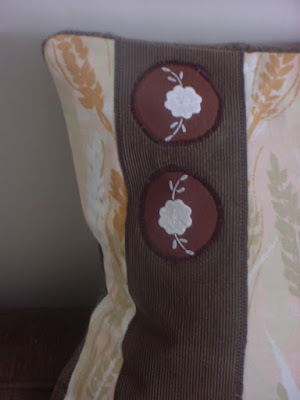 The back is a recycled sweater, the front a happy amalgamation of a thrifted tablecloth and pillowcase, an old pair of my cords, and one of Mr. S's shirts :-).

The ball was rolling, so I decided to try making my own pillow to cover. Beside the sewing machine is a container into which I throw all my snippets of fabric, thread, etc. (no old needles!). After a couple of months there is quite the stash, so I tried stuffing a pillow: 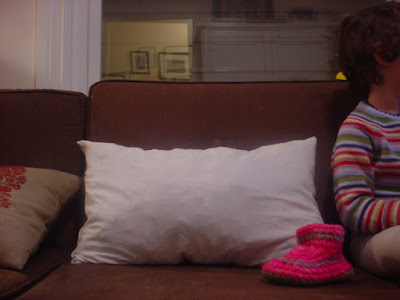 This is quite possibly the hardest and lumpiest pillow ever. I will have to cover it in something extremely soft to justify its continued existence :-)

And speaking of stuffing, Safiya and I have been cutting up plastic bags to turn into balls of plastic yarn (there's a net shopping bag in Erika Knight's "Simple Crochet" that I'm going to try), using gooseflesh's tutorial. But there are the tops and bottoms of the bags left-over, that don't make the cut (ha!), as it were....What does this have to do with pillows? Well, I inherited the pillow on the chair in the picture below from my Grammy, and given its rustley nature, I'm pretty sure it's stuffed with some sort of plastic detritus, and it makes a perfectly serviceable pillow, so.....why not, right? :-) 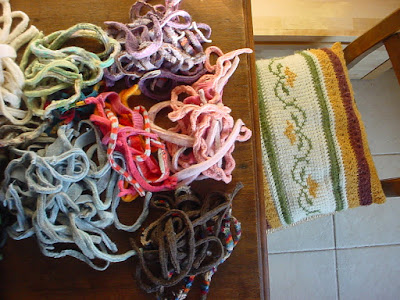 ha! only a true felt mistress would know what they are - I've been discovered! and I love your pom-pom idea, Betz! my little guys are destined for something else, however ;-)