Before the stack of dishes to be dried get too high I'm trying to squeeze in a post, because this is what Mr. S. does with them: 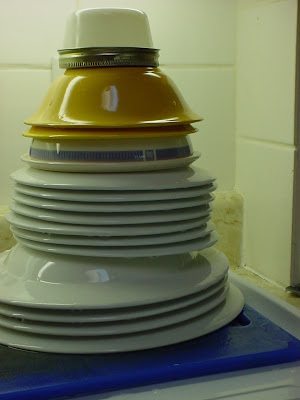 I think he thinks it's a sport. If I don't bother drying them, a skyline of dishes remains overnight, which leaves me with a bit of unease, only allayed by the knowledge that this is an effective robbery deterrent. One breath and the whole thing comes down...

Some evenings, especially around craft fair time, the in-between dinner and dishes time is when Mr. S. takes Safiya to our neighbourhood park so that I can collect myself. I've always liked that expression because that's exactly how it feels. oh there's that piece of my brain...what's that train of thought doing under the couch?...oh crap, I totally forgot about the handful of worries I stuffed behind the armoire....well, they can just stay there, I'll deal with them later ;-)

Tonight we just hung out, the three of us, but I did squeeze in a new seam. I needed to join non-felted wool knit to felted wool knit, and I think it went rather well, for a first try: 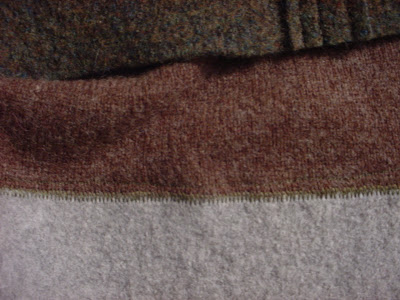 The non-felted wool I turned over 1/4" and then sewed down with a straight seam in order to give a stiffer edge to work with, pressed it, and then I just zig-zagged the two together. Didn't do a trial bit, just went for it, so I'm pretty glad it turned out. It's a very late wedding present for friends we love dearly. Bit by bit that list on the right hand side there is getting shorter!

And in other walking-foot love: 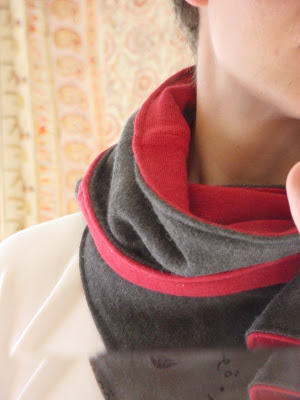 A late Eid present, a scarf that went unfinished because my sewing machine exploded at the last minute. Literally. The little arm on the walking foot must have jiggled something loose and all of the sudden - !!!!!!! - pieces of the foot, the needle, the shaft - everywhere! Slight panic, picked everything up, and then I decided - BAH! - it was too unbearable to deal with right then. Which worked, as I was able to fix it after Eid due to a much calmer head, having cooled down a bit!

Oh, and dinner? That went rather well too. A recipe for stuffed cabbage rolls from The Winter Vegetarian, by Darra Goldstein. It's a lovely read. The rolls were delectable, stuffed with barley, shredded apple, onions, and parsley.....

the rolls sound fantastic, marnie! i love that scarf too!! makes me know that a sweater i just found a little moth bite in will be transformed! as soon as those house projects are finished up...