Heat and Also the Joys of Mud 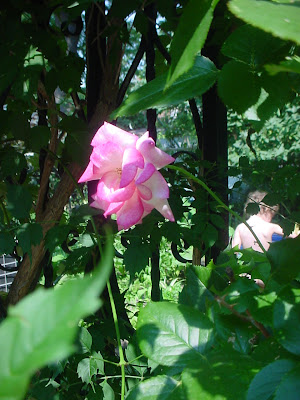 It's so hot that even though I'm not moving, the bends of my arms are perspiring - no, my elbows are perspiring - it's 36 C in the shade! Safiya is coping in a very logical manner, by using the water in her little pool to make mud and then cover herself with a layer of said mud. 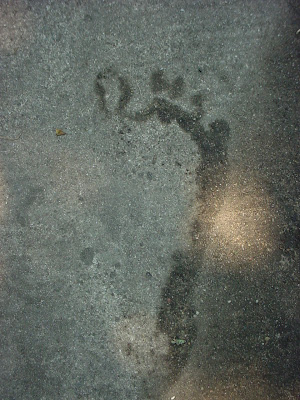 She's busy, running up and down the path to where I'm sitting in the shade, showing me discoveries or asking me to COME AND SEE THIS! even though the tiny size of our backyard means I can obviously see whatever it is she's doing without even shifting positions. It's something that flabbergasts me about this age - the enthusiasm, the drama, the extremes. On some days one minute her face is filled with delight, the next there's been some kind of disaster like the stick she's using is, heaven forbid, too short or she's crying and telling me, randomly, "I really like red!" It can be trying when I attempt to help and nothing works (although these times usually coincide with when she's hungry), but mostly it's just hilarious and I try not to laugh too much: "Mama, it's not funny!" I figure that this is part of being three and that her brain's going through a growth spurt and it's just hard for her to keep up sometimes....

As for my sanity in this heat, I've had to make some modifications inside. We've never had curtains in the living room (to the horror of my mother) and I've always liked the spareness of it, but the windows face south, and even though we have central air, we never turn it on. So some shade was warranted... 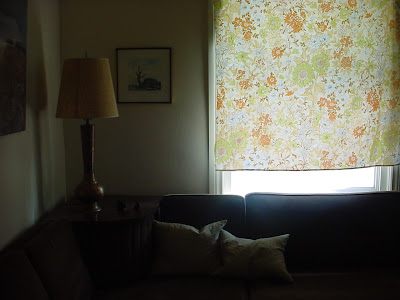 I don't think this counts as a craft project, because they're just tacked up, but I'd like to do something simple like two staight lines' window shades and then also make window quilts for the winter.

Oh - the central air doesn't go on because I loathe it. The noise, the having to close the windows, the disconnection from nature - none of these things do I associate with summer. So it stays off. The actual unit (put in by the previous owners) also occupies the sunniest, best spot in the garden, so now it's personal, you know...

To spend the time outside, I've been bringing out my projects and I've discovered that by keeping it small and pick-up-and-put-down-able, both Safiya and I keep happy. Right now she needs me by her side, puttering away, not necessarily always to play with but just there....

Something that's been out in the garden a lot lately is this quilt for my dear cousin's little baby boy, Jack. My cousin always had a pet rabbit when we were younger, and so I used some cute rabbit fabric that I inherited for the front and I'm almost done the embroidery: 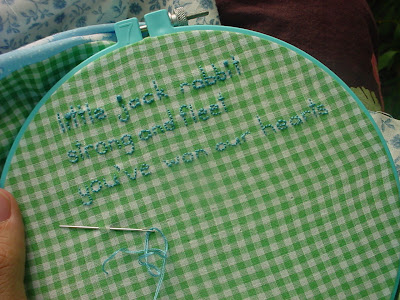