Not Quite the Right Tools (Or, Making Do) 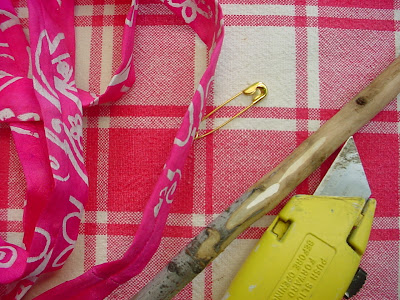 The streamer was simple-ish. First I sewed about 30 cm long, 2" wide (yes, I know that's two different measuring systems, but there you are) strips together into one long strip about 7 feet long. Then I looked at it and thought "hem each of the two long sides or make a tube and turn it inside out?" Not liking the prospects of making such long tiny hems in such close quarters (fabric-wise, I mean) I thought how hard can the tube thing be? (She said, having never done it before.)

If I had thought ahead (ha!) I would have jabbed myself in the shoulder preferably with something memorably pointy and said "and what are you going to turn such a long tube inside-out with?" The question only arose after I'd already sewn the tube. I dunno, a chopstick? What? They make tube-turner-inside-out-thingys, I know, but not having one of those I opted for the ever handy safety pin, which did the job.....took about 45 minutes, but it did the job.....

The unexpected pleasure of the whole thing was making the handle, which started out as a plain stick but then I felt like a negligent parent giving my child a ribbon attached to a stick, which thought occurred at exactly the same time as I was lopping it off its branch with our exacto-knife. Hmmmm. A couple minutes later the bark was gone, add some sandpaper, a little olive oil, and I had a proper handle....and a whole lot of pride :-) 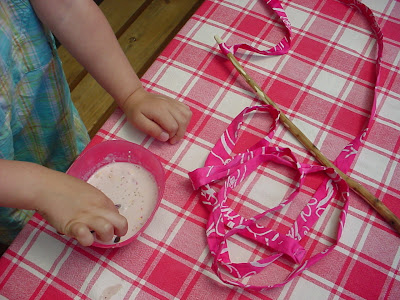 Look at all those words for just a little streamer.....but look how much fun was had..... 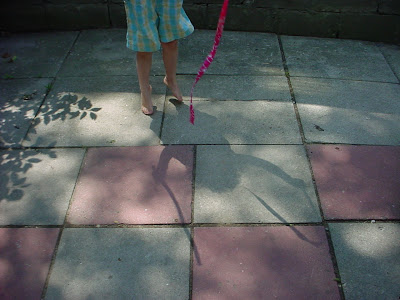 I love that she just has to jump up and down as she waves the streamer around. And I love that she only eats her ice cream if it's melted, or otherwise it's too cold.....
at 13:30