Caution: Math Talk Ahead (But if You Run Away You'll Miss All the Beautiful Pictures!)

The rhythm of craft seems to be peculiarly suited to mathematics, and in saying so, I'm kind of making an admission....I'm a bit of a math geek (it was one of my majors) - Ack! Don't run away! I'm not a true gets it math geek (is that better?). Those people who understand it like language I really respect, but I'm just a cool-isn't-that-a-neat-outcome kind of geek, and since having Safiya that portion of my brain has been poked into a back corner by some fierce Mama stuff, so it's been a while.

Until the Toronto Craft Chat, when Becky (who runs the Good Catch Craft Fair) mentioned she'd been crocheting hyperbolic space. I was soooo excited (inner geek just tore open the doors and embarrassed me.....), because last year Whip-up had a post on math and craft, and the connections between the two had been percolating in my brain for a while. Now, I haven't tried to crochet hyperbolic space yet (!), but I was thinking of starting with a small quilt, maybe using the Fibonacci sequence or depicting fractals, although it would take me a lifetime to be able to quilt like Rose Rushbrooke, whose fractal quilts are incredible works of art: 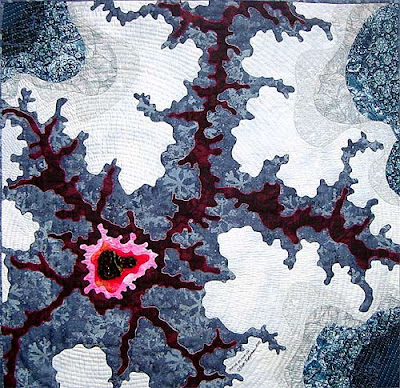 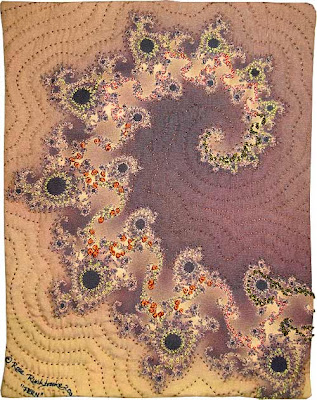 For me, the beauty of mathematics is far better expressed and easier to understand when it's tangible, when I can hold it in my hand, which rarely happens. (To understand genetics, I used to make little DNA and RNA sequences out of playdough to understand replication and stuff. Staring at it on the page was not my forte.) Also, we are all programmed to recognise patterns, to try to make sense of the chaotic, and often it seems what pleases our brains pleases our eyes.

However, what's even more fascinating is when mathematics is art. So often in our culture it's regarded as merely a tool, a way to get more important stuff done, and the gracefulness of the mathematical language that many researchers and professors feel is lost to us. One of my previous (excellent) math professors Bill Ralph actually creates beautiful artwork generated by his algorithms: I love that he describes his work as a process "much like creating a sculpture from a pile of leaves by blowing on them...Each piece is like a little window into an exotic mathematical universe that has never been seen before."

There are little bits and pieces of this around, people synthesizing, even just little things, like a potholder reflecting Leibniz's Theorem. Like another cool quilter who I met at the Toronto Craft Chat, Johanna Masko, whose beautiful work I think reflects her curiosity, as she says, about "organised randomness" and her ability to think around, through, and on top of, the box: 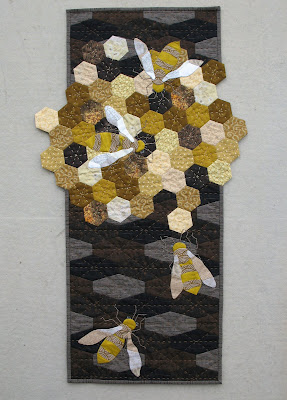 Maybe many of our reactions to mathematics or any other field about which we cringe is due in a large part to the manner in which we were taught. And the false idea that fields come in nice neat little boxes labelled "mathematics" or "science" or "quantity-surveying" (or "craft" for that matter) that the administrators hand us. Rejecting this is what I call believing in the great AND. Stuff always escapes its box and then gets into shenanigans with another box, and that's when the cool, unexpected sh*$ happens. But you know, other people have said and can say things like this much more eloquently than I...

Sir Ken Robinson speaks about creativity and how schools kill it.

okay, now i have to share the mathcraft links i have dug up...

#2) the etsy shop of das kaninchen, who is making fibonacci-based plush crafts:
http://daskaninchen.etsy.com

Becky you rock - huge thanks for the links, and you're so sweet!