Excitement and an Offering

There is nothing equal to the bursting-at-the-seams excitement of a child. Safiya had been out with Mr. S. while I went to get the tree, and when they came home, I could see immediately that she had been told of its imminent arrival. After she had meticulously vacuumed up all of the errant pine needles on the floor (this child loves vacuuming), out came the ornaments. For each and every one, she picked it up, held it aloft like the holy grail (but with more enthusiasm than reverence) and shouted: "What's in this one, Mama?!!" Every single one. No other comments, just an entire afternoon punctuated by "What's in this one, Mama?!" and some other childish murmerings. 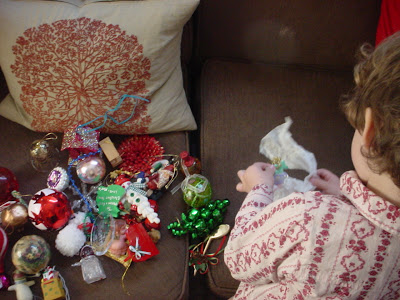 And, from the appearance of the tree, you can tell that a three-year-old lives here: 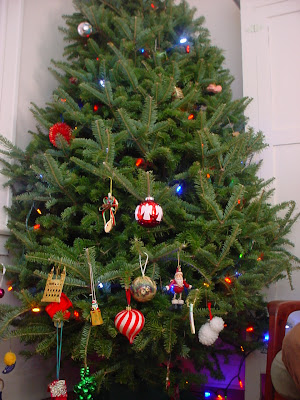 Later, I was surprised to find this by the back patio doors: 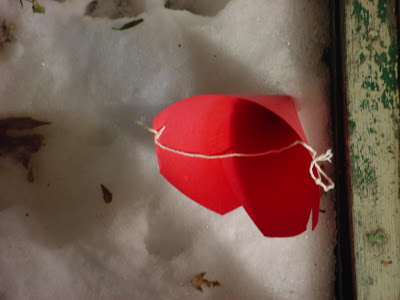 What is that? Well, at our house, there's the myth of the party-hat. Once, Safiya left a paper party-hat outside. It was subsequently ruined in the rain, and, well, (shhhh) it got recycled. Except that she asked where it went, and being the sensible parents we are, we told her...that the raccoons that live around here must have taken it for their party. So now she believes that part of raccoon behaviour is to appropriate little girls' party hats.

So, when Mr. S. and Safiya were making hats that afternoon, she insisted he make one for the raccoons. And leave it outside for them. And thus is born a new Solstice tradition: an offering for the raccoons. :-)
at 21:15

yay for offerings for the raccoons, and for the creating of raccoon party lore! and i can't leave without acknowledging that pillow beside the ornaments -- i LOVE it.