Outside the long weekend was mostly waiting, spring paused, everything quiet as it snowed softly...even the sun was just a suggestion of itself...

However, inside, at my parents' house, my mother and I did the miraculous, the unheard of...it was quite the moment.

We cleaned out her stash - you know, the boxes and boxes of fabric in the basement, in the office, accumulated by the sewing machine...There was fabric in there that I remember picking out for clothes at the beginning of highschool! (That was...ahem...a while ago.) There was stuff that she had inherited. It was a riot. Of colour, of laughter, of memories. Hands a-flurry as we chatted:

"Do you remember the curtains I made with this?"
"Do you remember when I picked this to match with that other fabric?"
"I can't believe you still have this!"
"No, you are not allowed to make yourself a skirt with that..." (says me to Mom)
"What am I going to do with this?"
"Remember when such-and-such fabric store went out of business and the sales!"
"Oh, my aunt gave me that piece..."

There were a couple of rules:

1. If Mom had already made something out of it, she wasn't allowed to play with it again.
2. If she hesitated, even for a second, I got first dibs or I moved it to the donation pile.
3. Only one selection out of multiples allowed. (I mean really, how many different kinds of black wool do you need? Don't answer that, I already know...)

In the end, we pared it down to a mere three and a half large toteboxes (including home dec) for her, about 5 large garbage bags to donation and - sweet! - two toteboxes of fabric that I inherited (yay! Thanks Mom!). It's all cottons and corduroy and silks and wools - lovely lovely stuff. I am sooooo excited. 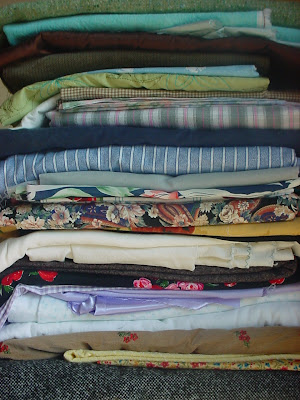 This is only half - we couldn't fit the other totebox in the rental car for on the way home. I seriously considered leaving Mr. S. there (he could take a bus!)...

My Dad laughed as he saw my husband loading the car up with all the fabric...

you, my friend, are one lucky lady! yay for your crafty mama!