Play is the Opposite of Failure

For the past almost two weeks, I've been pulling on threads.

Actually, I've been pulling threads for a while now; doing untangling of my own. Maybe, to use the imagery of late, what I'm doing now is weaving something from the pulled threads.

Weaving something atypically open-ended, on instinct, without knowing the pattern and then being overjoyed to find the work just right, just what was needed, just what was wanted.

The picture that's emerging is the antidote to the never-ending, never-accomplished lists that have always been my constant not-really-that-kind-and-a-little-bit-too-competitive companions; my constant minders. It's the antidote to the voice in my head (not my own) that has always said "Not Good Enough" or, "You Know That Thing You Wanted to Do? Not as Important as the Should be Done". I firmly believe that none of us is born with an inner voice like that, but knowing it and discovering what will cancel it out are two very different things and sometimes the finding can be long work. It certainly has been for me. So how to find value day-to-day for the things I really ache to do and also not fail?

A while ago I had an argument with myself. And, wouldn't you know it, it's my own argument, my own thread of words, that's led to an antidote that works; for me, anyway. When you read other people's platitudes, sometimes they resonate, sometimes you recognise the journey, the way, that led to the words they're saying; the phrases people pass around like talismans and say to themselves in times of trouble, in front of the mirror. But none of them have ever took root with me. I tried it:

Me: "Well, you really only have two choices: not to fail, or be o.k. with failing."

Self: "It's impossible to do the first, and I am not o.k. with the second. (Cue Westley "Then we are at an impasse".)

Me: "Maybe there's no such thing as failing."

Self: "That's just another way of saying it's o.k. to fail."

As bleak as that seemed, it was a start. It led to the understanding that what I was really searching for was a way to not fail. A way I actually trusted.

And one day out of a tumble of words, a knot of thoughts, something new emerged and took root. It took a way of thinking about things that's not instinctual to me and made it of value because it's the antidote to failing. I'm tempted to make it into a tattoo, but for now, I'm working on a design to embroider. 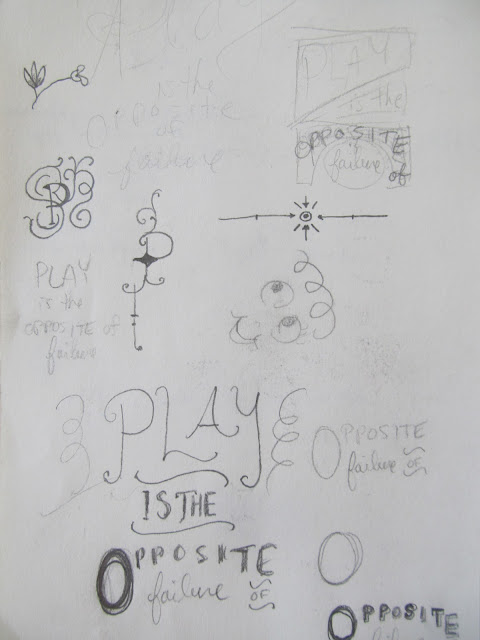 Play is the opposite of failure.  And because it's a statement of my own, in my own voice, it's been so much more effective at cancelling out that deep doubting voice than anything reactionary; any argument that I've tried in the past. Just my own voice, firm and steady, saying "play is the opposite of failure" and finding joy in it, because in the end, all the good stuff, the stuff that had no acceptable value but now does, the stuff I remember passionately and fondly, is play.