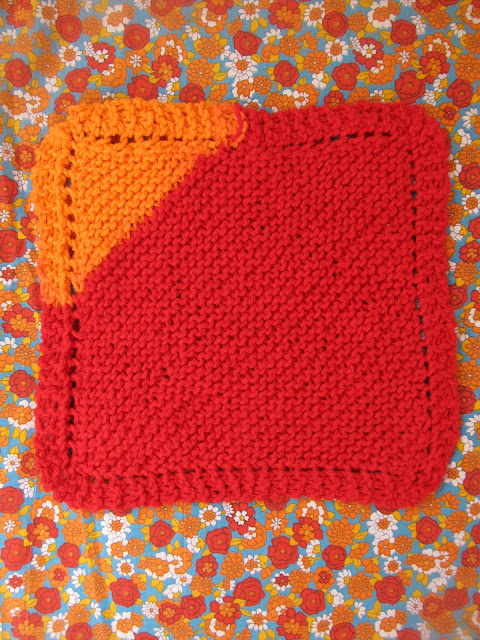 I have a feeling that picture might blow the pixels off a few screens, but there's no subtle way to photograph those colours, so there you go. Besides, it's my only completed knitting project in oh-so-long, so I'm proudly putting it up there.

Whilst sorting the yarn bin, I discovered this washcloth that I had almost finished. Almost because I ran out of yarn. Crappy craft store yarn which I'd never be able to match anyway, so taking the needles by the horns, I finished in orange.

There is an inordinate amount of pleasure received from finishing a project, no matter how small, that's been on the needles for, oh, say....eight years? Maybe nine?

I struggle continuously with the difference between what I can see is possible, or rather, what should be possible, versus what actually is possible. They are disparate things in my world, mostly because the "should be possible" that I pick is probably more suited for a superhero rather than a mere mortal such as myself. This results in a lot of unfinished projects. 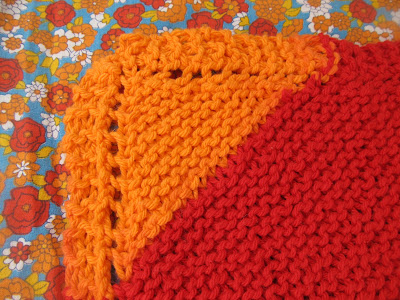 Some days, the lists of things that should be done, that could be done if I just try harder hound me until the light fades and I prop my aching legs up on the couch and zombie-surf the web just to empty my mind. Those days don't happen often, but they do happen, sometimes several in a row.

It's not something I actually enjoy. The funny thing is, those days are my own creation. Lists are straightforward and simplistic. Life is not. Maybe if I looked at the things I want to do as goals instead of line-items to be checked off? Is that different? I don't know...I'm still working on this.

The only thing I know about it now is that it's hard to make allowance for life if I'm just going by a list. And that sometimes it's o.k. to finish with a different colour.
at 11:20