Playing Chicken With The Heat, Part the First 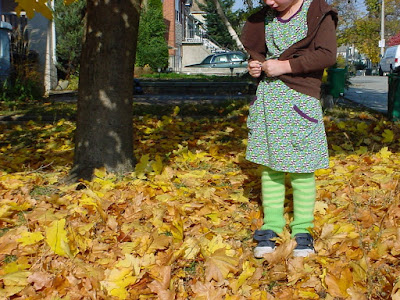 Simple leggings for a fall day: 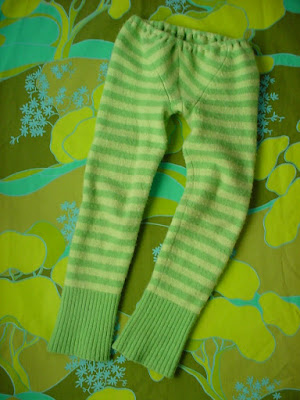 Take one felted wool sweater (one that still has some give) and cut the arms off past the shoulder seams (be generous in the length, and choose a sweater that you guess will fit the child in question). Then, after a couple of wriggly fittings, sew together to create a middle seam. With the top folded in once to make the casing for the elastic, these are easy-peasy, and if you are not interrupted a gazillion times, probably sewable in precisely two minutes. O.k., so I exaggerate, but it is really easy.

I put a dot on to mark the back: 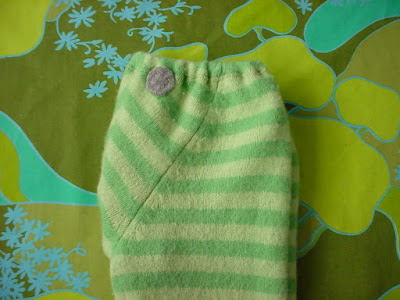 See, it really was made out of just the two arms! 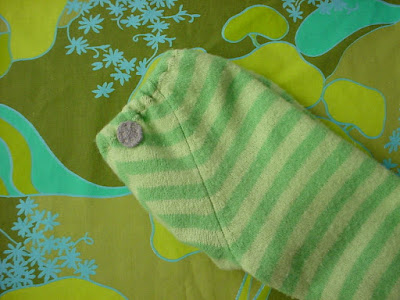 A bunch of these are on the drawing board because we're playing chicken with the heat, so long underwear will be a necessity around here (this November heat wave has been so lovely), and because the wonderful wool long underwear that we bought for Safiya two winters back are starting to wear.

Actually, to be fair, the pure wool long underwear has not started to wear; it's a bit short, but still going strong. We had also got her a pair in a lighter silk/wool blend, and those are the ones that I'm going to have to darn. These woollies were worth their weight in gold (I should mention that I'm not associated in any way to Nova Natural), and we got them before my new-found-ish let's-clothe-the-child-in-cast-off-sweaters bravery started. Frankly, since the proper $7 second-hand sweater will now provide us with not only leggings but mittens and a scarf from the body (or a hood.....or a tea cozy....), I wouldn't spend that amount on long underwear these days, but if you don't want to sew your own, we found the ones we got to be really really useful, well-fitted and warm, and all kinds of nice.

Oh, and if you want a proper tutorial, I saw that Green Kitchen has a nice sweater-pants tutorial that is very clear. It's in a similar vein to the pants pattern that I used for Safiya's pants.

Clearly my sewing methods are not proper, and it's highly probable that the next pair of leggings that I make for Safiya will not resemble these ones in the least :-)
at 08:52

i love the pants, they are adorable!

OMG those are so cute! What a great idea! Thanks for sharing!

Thanks so much for sharing that! My neighbor just showed me pants made from an old sweater and I hadn't seen it before. You're giving me the extra push to go ahead and try it for myself!
Cheers,
Tracey

marnie, these are divine. i now want to find a sweater big enough so that i can make a pair for myself... what do you think are my chances of a 32 inch inseam? keep your eye out for that gigantic sweater, okay? maybe safiya's new friend will assist.

Thats a fab idea. I love the stripes and it did take the phots to prove to me that thet were sleeves. I will put that on my list to do.

I so enjoy reading your blog. You're so creative.

I just made a pair and you weren't kidding, these are super fast. Plus I got to use an old cashmere sweater that was stained. My daughter who thinks everything is itchy absolutely loves them. Thank you so much for this great idea!!! -- jean

And Jean, they are crazy super fast, eh? I'm so glad you gave it a go! Woolly leggings for everyone!

Those are so cute it's unbelievable!