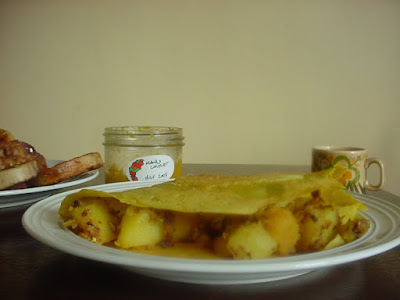 French toast, Turkish coffee, and Indian chickpea flour "crepes" with ginger, garlic and fennel seed potato filling - that is the perfect Saturday morning breakfast. And, don't forget the last of the homemade mango chutney so gratefully received from my friend Kat. 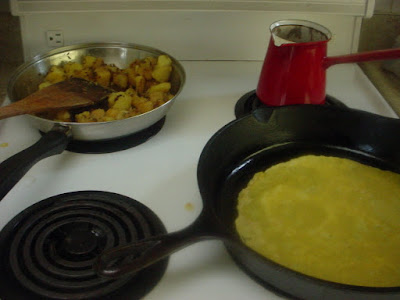 The French toast was mainly for Safiya and Mr. S.; it's a Saturday morning ritual. The rest was my indulgence - I've been playing around with a lot of different grains lately (and some not even grains!), making bread-like stuff. The chickpea flour crepes are to die for; savoury, silky on top and lightly crisp on the bottom, and you don't even have to flip them! I'm hoping to venture into bean-based flatbread territory soon, using one of my favourite cookbooks, Madhur Jaffrey's World of the East Vegetarian Coooking. 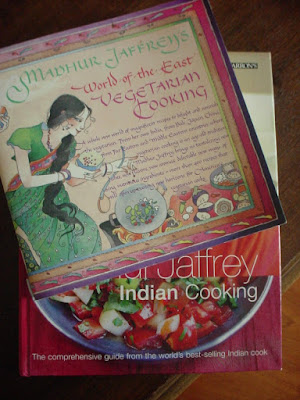 Some plain leftover potatoes were transformed into a better version of homefries ;-) using one of my favourite recipes, sookhe aloo ("dry" potatoes with ginger and garlic), from Jaffrey's Indian Cooking, and voila, a golden warming breakfast on a chilly almost-winter day. They're so good (we find the fennel seeds essential and put extra in, and will also substitute anise seeds if there is a we-have-no-fennel-seeds emergency), that I'm trying to share the recipe here; if you can make it out, it's worth it! 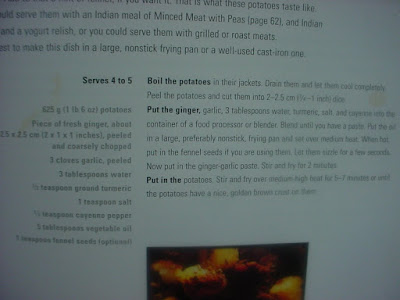 
Note: thank you, Google! Here's the (almost-identical) recipe for the potatoes. And here's the chickpea-flour pancakes (although in Jaffrey's cookbook there is much sprinkling of oil around and on top on the pancakes after they're poured :-) Enjoy!
at 01:03

ohhh... that looks amazing! i love turkish coffee. i've only had it once, but it was amazing!

oh! those potatoes look very delicious. I will give them a go. Thanks for the inspiration!

Tasty! The cover on that book is so pretty!

I love MJ cooking but I haven't seen that book, will have to hunt it out! Love the Amy Butler trousers.

so excited to see this recipe--i have a bag of chickpea flour sitting in my pantry, just waiting!