After All That Talking, I Need Something to Eat.... 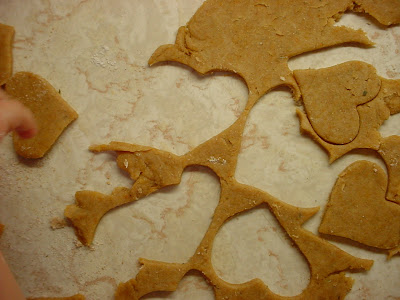 We made crackers. For two reasons. One: we've been buying a crazy amount of crackers to eat with hummus. When processed food starts getting bought at that level, I can't help but think "this is ridiculous, these can't be that hard to make". Two: at the mere mention of crackers, Safiya got a gleam in her eye, saying "goldfish! crackers! yay!" Thank goodness for Shmooed Food's vegan goldfish crackers. (I started the search for cracker recipes with Martha - silly me - butter and more butter, anyone?) We made hearts, and I didn't roll them nearly thin enough, but they were very very yummy. 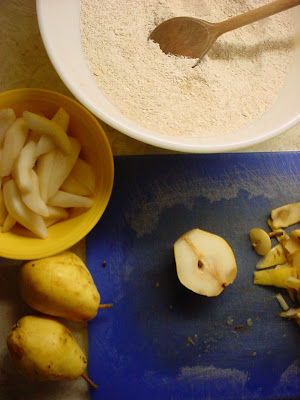 And then the lovelies in the above picture were turned into the Seriously Best Cake Ever. We took the method from epicurious' Upside-Down Pear Gingerbread Cake and subbed The Vegan Chef's Gingerbread Snack Cake for the cake part (I kept the butter for the caramelizing of the pears - has anyone caramelized anything with oil before?). I'm not good at taking pictures of end products of food, and now it's gone, but the recipe's so good it's not hard to imagine :-)

A good friend of mine called in the midst of baking and asked what we were making. I told her, and then she laughed "Of course you are!" I'd love to keep the illusion going, and her idea of me was lovely for the ego, but the truth?

Got as far as mixing the dry goods the first day. One batch of peeled and cut pears forgotten overnight on the counter the next day. Damn thing took three days to make!
at 21:39

I am giggling at this.
And its no illusion my friends....
baking your own crackers?

Can I please just stop myself from buying juice boxes first?