Define "A Little While" and I Don't Know About This Whole No Nap Thing.... 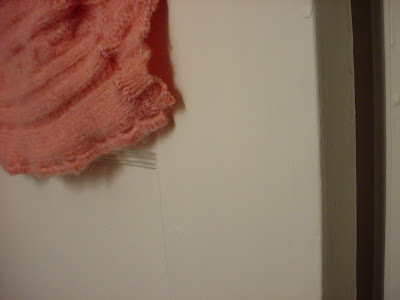 Yikes! It's Thursday already! How did that happen?
I'll tell you how that happened - no naps. This changes things entirely, especially craft-wise. Nap-time is that sacred hour-ish where I get to doodle (have you ever tried to doodle on your own with an almost-three-year-old? no? really? 'cause once you've been hoodwinked into drawing every baby animal in existence and then their mamas, and then their babos, and then their grannies....so I'll save you the trouble - it's futile. Fun, but futile), peruse a few blogs, write this blog, organise ribbons, move fabric around, daydream about projects, actually do projects, all that stuff that feeds on uninterruptedness and solitary-ness....All the stuff that feeds me.....Now it's Thursday and there have been a million things to say, emails to write, seams to sew, embroidery and....

Well, there's always a way around things, or through, or with, or not, or AND

So, the Good News Round-Up, then (and Some Randomness):

:: I won something! You know how people say they never win things? Well, with me it's actually true, but on Tuesday I won a beautiful purse from chrysanthemum! Just for saying hi! Her blog is full of great writing, great craftiness, and great aesthetic, so I can't wait to see the bag "in person" :-) ::

:: Speaking of winning things, the mistake stories so far are a delight! (See the just previous post.) If you're lurking, please come out of the wood-work or from under the knitting and say hi! If you don't have a story, that's alright, because then we can all gang up on you and get you to tell us how never to make a mistake again, which would be an awesome time-saver, really....o.k., I promise no stories is cool too - we won't bug you - just say hi! ::

:: The Big Carrot (see this post to find out why I'm so happy about this) labelled their bulk section finally, with stickers put on the Canadian-grown items. Yay! It's a start! ::

:: Has it been a little while yet? I may have unwittingly spoken an untruth when I said I wasn't going to do any more craft fairs for "a little while". BECKY, who runs the monthly Good Catch Craft Fair, invited me (!) to have a table at the fair on August 18th. Actually, she invited me last week, I've been holding out....I've been a bit flabbergasted and soooooo verrrry excited I thought if I held out it wouldn't be so lame how unabashedly excited I am to have been invited to this, but lo and behold....nope, didn't work! And it was kind of soon (as in immediately) after I said I wasn't going to do any for a little while.......BECKY's so sweet I couldn't resist :-) ::

i'm soooooo embarassed - i just realised that i called Becky Jen when i originally posted this - oh-good-golly-my-face-is-so-red, especially since she IS really nice and that was just so thoughtless - sorry Becky!

:: It's Safiya's 3rd birthday at the end of the month! Yippee! For some reason this seems like the new year to me. You know how the school year was always really the New Year and New Year's was just an excuse for a party? Well, Safiya's birthday is my New Year. She's already discovered one of the presents I was working on (see the above picture), so naturally I have to make some other surprise presents ;-) ::

:: If you see in the comments below, I had my first comment in another language. Cool, I thought, Spanish! (duh!) Went to Babel Fish, cut and pasted the text....so....not Spanish! My triumphant look at how easy this was vanished into bewilderment.....thank goodness it was Portuguese, but I'm thinking of randomly translating stuff like that 'cause the results are pretty fun and apparently I have not enough things to do in the day.....::

:: Safiya and I watched a thundershower today :: 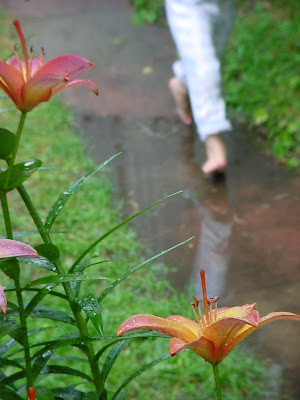 I noticed the bins at the Carrot last night, so good.

Fin's two on Saturday and I know what you mean, their birthdays are bigger than any other day to me. No big parties, just big, fulfilling, memory filled and wonderful.

i so love the image of you drawing extended families of all things animal! can you tell that my babe is still far from this stage? perspective is such a wonder.