Dark Days Past and a Light for Uncle Larry 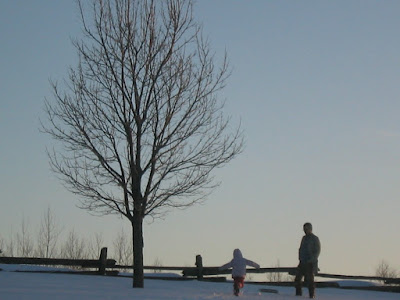 Right now, I can hear the trickling of a neighbour's backyard pond, the quiet weightless exhale of a beautiful spring evening, the occasional twitter of a bird prolonging the day in trees just starting to green and the photo above of Safiya and Mr. S. seems from another age altogether.

However, it was only a little over six weeks ago that that picture was taken at my Aunt and Uncle's house. Six weeks ago when my Uncle Larry, a beloved fixture in our family, suddenly died of a heart attack at the workplace that he and my Aunt Ruth have shared for many many years. He was 52.

A year ago I posted a little bit about my aunt and uncle and how much the example of their lives had influenced me. They were a real couple - they lived for eachother and because they lived fairly far from family, they had had to work life out together, and writing all this in past tense hurts so much. But distance and time looses the tongue, about which I'm glad because my Uncle Larry deserves much more than a few words even though that's all I've got right now.

He was funny. He was a prankster and delightfully, unabashedly crazy, which probably made him the sanest, most evenly keeled person in our family. He was generous. He was tender and attentive to kids, which, given his coarse joking and bossing around revealed more about our preconceptions than it did about his personality. He would call. Very often it's only the women that maintain ties in a family, but not just my Aunt Ruth called - Larry called. He called when I had cancer. He called when Safiya was born. He called my grandparents, his in-laws, daily. Just to see how they were doing.

He could be a pain in the ass and we loved him for it. ("Oh, Larry..." with a smile and a roll of the eyes was a favourite refrain of my Aunt's.) Unafraid, approachable, and a great salesman, he and Ruth would have yard sales where most stuff on the yard was priced at a few pennies; Larry wasn't interested in the money, he was more interested in having a gab with whoever came by. Every single person who paid their respects in my Aunt and Uncle's small town (and there were so so many - you could tell when shift change was at the factory where he and my Aunt worked because there would be a hundred-person line-up at the funeral home) didn't offer a generic condolence; each one had a specific story, a particular anecdote that made us laugh through our tears. How could a person in dying make it such a rich experience for the rest of us left behind?

He did it easily, just by living.

Oh, Marnie, you said that so well at the end: "How could a person in dying make it such a rich experience for the rest of us left behind?" What you say about people paying respects reminds me of my mother's funeral. Thank you.

Well, I think it is really funny. He probably became the most healthy, the keel evenly person in our family. He was generous. He was tender and attentive to children, given their prominence dirty jokes and revealed more information about our preconceptions about what he did about his personality.

Your uncle really knew how to make people smile. What a beautiful post I loved reading it.