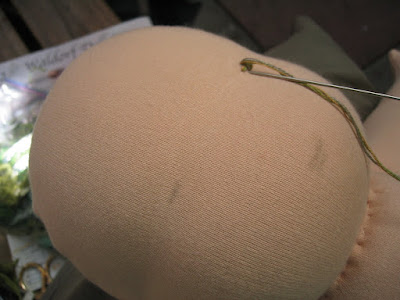 This is not some horrible doll-torture picture. It is the loving process of adding the final touches to a very special addition to Safiya's world.

A while ago Safiya came to me with a request. She wanted a doll, nay longed for a doll. A proper doll that she could practise on for when The Bump arrives. She has a fair amount of stuffed animals (ahem, thank you, extended family...), but we'd not ventured into doll territory yet. Fortunately my friend Katharine had recently made Waldorf dolls for her kids using kits from Weir Dolls and Crafts, and had reported very favourably on the whole process.

Safiya and I chose the components together, and in this case, considering the imminent arrival of The Bump (we're now at about a week-ish to go....) and my propensity for procrastination and the whole I've-never-done-this-before thing, I chose a pre-stuffed head, pre-sewn fabric body parts, and partially assembled hair.

Safiya's growing excitement was infectious, and it was satisfying, trying this new thing. We stuffed and talked and planned and sewed. And I came to appreciate the instructions that were stated with regards to attaching the head to the body: "This will be difficult..."

Right, I thought smugly, that's for people who don't sew. Ha! It was hard! Which is good :-)

And when she was done, Safiya took her in her arms tenderly and named her Charlotte. 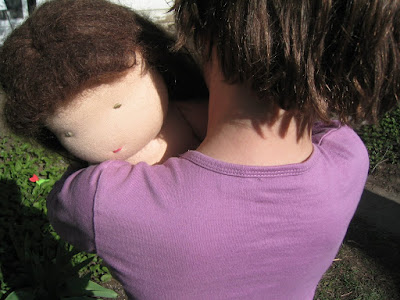 She looks happy to be here, and is well-loved, like any new addition to our family.
at 15:21