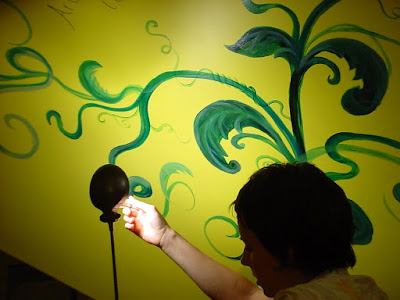 Other than anecdotes and a shout-out here and there, I rarely talk about my friends. I don't really ever discuss friends with other friends, because I'm painfully aware that I could represent them wrongly, or unfairly, and that would be disloyal. Or only flatteringly and gushing, which would be unfair and disloyal as well, I suppose, because no true friend wants to exist in only one dimension. There is a seeming ease, a swimmingness that others have in their friendships that I think I lack, genetically speaking :-) It's not for want of sentiment or spirit or feelings, it's just that I'm perhaps a little odd (anyone who knows me can keep what their thinking to themselves right now.....) and a lot of the times that makes for an awkward fit.

Sometimes I luck out. I have a twin friend (we know this because our husbands have the same birthday...what more evidence could you want? That, and she wants to buy bulk flour with me, which I think a big step in our relationship.....) This is comforting, because now I know that I'm not alone in the weird universe. She is very important to me. There are many knowing glances in the time we spend together, and living is effortless with her. If we ever move, our proximity to their family will be a concern.

There are old friends, you know, the good ones; the ones who you haven't talked to for forever, or they've moved across the country (or world!), and yet when you connect again it's as if no time has passed (which reminds me, I need to make a phone call or two...) Or, they're the friends who always call when you're sick, or who call for no other reason than to tell you a really bad joke (and you laugh).

There are family friends. People who were as accursed or as lucky as you to be born or marry into the same family and who know what's going on and what the threads are and who don't need a whole lot of explanation, who can read between the bloglines, and who will always be there, because they just refuse to go away :-)

Then there are friends who are in flux - the ones that you've experienced major things with - it changes your relationship, makes you tentative again, and it feels like the relationship is metamorphosing, waiting.....

Other friends you meet because you're on the same path; the family strings are vibrating at the same frequency and there's someone there who quickly understands when you need help, that it's o.k. to ask you for help, who can laugh with familiarity at the ridiculous things your four-year-old says, and share in the bounty and the crap that life throws at you.

Obviously delineating people into categories is artificial; many of my friends cross boundaries, dip in and out of the pools I've just described, many are un-categorizable. All are important. But it does let me lead you to this last bit; new friends. 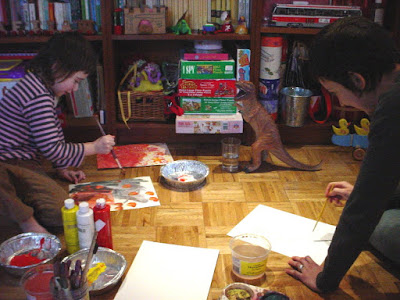 Most of the people I meet now meet Safiya and I together. There are very few instances when we are apart. It's a package deal, which is great, because "like me, like my kid". It's true. I certainly wouldn't hold it against anyone if they're uncomfortable around children, that would be extremely unfair, but practically speaking it makes it very unlikely that we'd be able to spend any amount of time together.

Even within the Toronto craft world, once in a while I'll show up at a show without Safiya and then, as my friend Katharine said, it's feels like I'm walking around giving people an incomplete picture, like I should have a sign stuck on my forehead that says "I'm really Safiya's Mama...." Granted, she has three kids, so her sign would have much more impact than mine (and be larger, so, more silly :-) but still..... 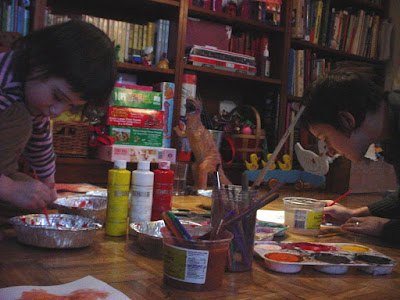 New friends. People who, by their presence, allow room for trying something you might not have before. Now, some of these may come to fruition, and some may remain acquaintances, which is the way it goes, but in the beginning they are all people who you witness taking much-appreciated chances about friendship, and for whom you're willing to be just a little bit vulnerable. Who you unwittingly test.....are they wildly talented and encouraging? Do they have a fabric stash or some other appropriate obsession like picking fruit in the middle of the city? Do they like Scrabble? Do you wish you could meet them in real life, not just in blog-land? (and there's lots of you!) Are they just enough weird? What are the important people in their life like? Will they go out of their way for some really lovely chocolate? Is there laughter in their life? Everyone has their own list. (My list is very long, and not everyone I know has a blog-link, but I'm thinking of you ;-)

Do they get down on the floor and paint collaborative pictures of dinosaurs with your four-year-old? 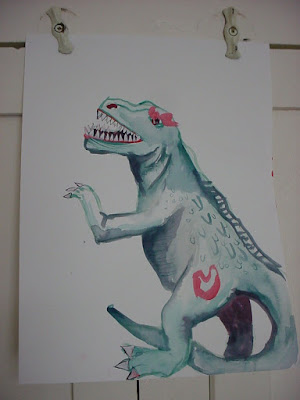 i totally smiled when i was reading this post. i love all the different kinds of friends you described! it was just fun to see you put it into words.

so much truth here about friendship.
and so many opportunities for me to smile and say, yes, yes, yes, my friend.

You certainly hit the nail on the head with this one, thanks for such a lovey post - you've just made my Sunday morning.

It's seems as if you have, indeed, lucked out my friend!

and see, such niceness here! i am indeed lucky.
thanks, everyone, for leaving such lovely words of kindness.