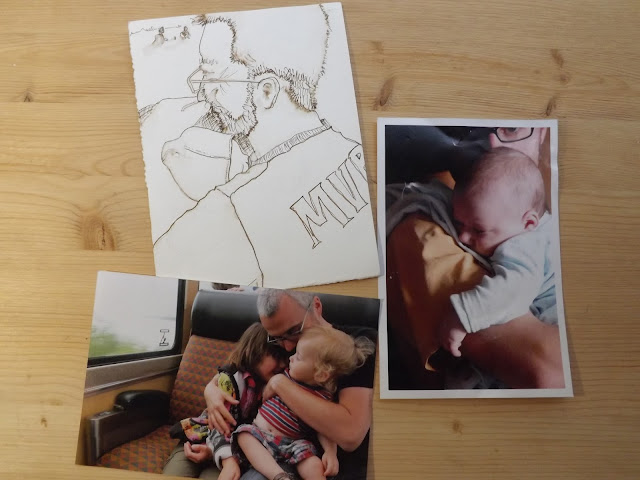 These are some of my favourite photos of my favourite people. They are out always, as is the sketch done by my good friend during a camping trip a couple of years ago. They show one of the things I love best about this partner of mine, Safiya and Zinadine's "Babo"; his contentment and happiness at the kids being with him.

Like many men of our generation, Mr. S. did and does all the things: diapers, bedtimes, reading, food, comforting, carrying, baby wearing, co-sleeping, walks, taking the kids to his work, etc. And on top of that, he's the fun one. Forts and ridiculous stories and jokes are his forte.

But it's watching him shed work as he walks through the door and totally be there with joy for Safiya and Zinadine that gets me everytime. Just like all of us, he's flawed, and makes mistakes and has struggles. But dear lord, the fierceness of his trying for his kids is amazing. He will do anything for them, no questions asked.

We were the first of our friends and family our age to have kids, and our families live far enough away that we both got thrown head first into this parenting thing, no crash helmets. The thing is, even though we've both wept with exhaustion at some point or another, it was a good thing. We learned very quickly how to do the parenting thing together. We became eachother's relief, and I can always, always rely on him.

Very early on, I was fussing at him about some way of doing something with Safiya (because I, as the mother, obviously knew how to do everything the right way ;) and Mr. S. said, "I'm going to have a different way of doing things sometimes. Please trust me that it will be o.k." This standing up for his abilities as a father took me aback (let's just say it wasn't a version of fatherhood with which I was familiar) and won me over and over and over.

Mr. S.'s ego isn't tied up in public accolades or recognition, but I wanted to write this, incomplete and inadequate as it is, to have it noted. He is an excellent father. So there, husband of mine: Happy Father's Day.