After a show, when I look back at what I've written afterward, I realise that it's mostly the ravings of a 12-year-old girl. :-) Anyway.....

Things I am enjoying making lately: 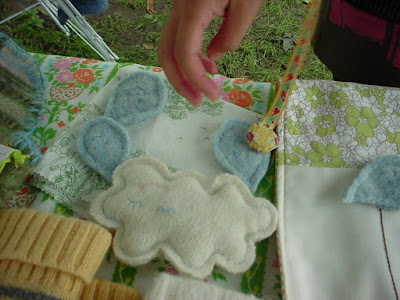 That picture is for my friend Janet. She had this idea a year ago and I promised that I would work on it and it's been percolating. And now it's here and I'm very pleased. What is it? It's a fishing set, of course. Fishing for rain. Happy rain :-) There are a bunch of other sets coming and they're pleasing me to no end.

Usually I'm pretty laid back about artistic license and integrity and things up in that alley there. Great masters like Mozart and such borrowed from eachother, so why can't you borrow from me....ish? Obviously, if someone rips people's stuff off for sale, I don't want to be their friend, but I post a tutorial here and there because I think it's good karma. I have no grand designs for a design empire. It's more fun that way.

That being said, even though that cute little set could possibly not be an original idea, it seems so to me (not to mention Janet), and I'm feeling a little proprietary. If I catch you copying this idea and selling it, I will hunt you down, that cloud will grow teeth, and gnaw at you in your dreams.

Very cute. Except the part where the cloud grows teeth and gnaws. I promise I'll be good.