This probably should have been a beginning of the summer project, but better late than never! Safiya cut out bags from fabric scraps for her stuffed animals while I, sniffling away and ignoring dishes, attended to this: 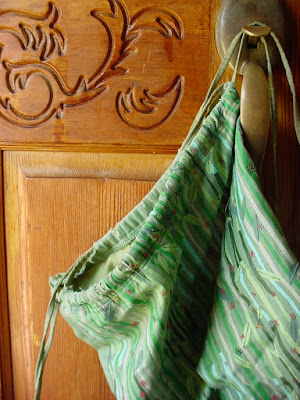 My Mom hates this bag. Seriously. "Loathes" would be more appropriate. She calls it "that ratty thing", as in "you're not going to take that ratty thing with you, are you?" Ha! Then there was a point at which even I had to admit that it was really ratty. It delighted me to give it a good wash, cut off the top, re-sew the drawstring and voila! casually flaunt it to my Mom the next time we went out. Daughters are supposed to irritate our mothers. It keeps them on their toes. :-)

Alas, the beloved bag wore out again quickly, and since repairing it again would render it too small to be serviceable...I can see my Mom raising her eyebrows in anticipation, glee about to escape her lips. Not so fast, Mom...

Assorted market bags, ready to go, their logos replaced by some pretty scraps, including that one in the back there...

Thank you for the chuckle.
And great idea about the bags - sometimes it's just too much to make them, what with so many giveaway ones lying around the house - but they're so awful looking - you've solved that problem!

Your idea of convalescing and mine are very different. I'd have knit eight or ten rows (this simple task taking me hours) only to discover my complete inability to count and spend the bulk of the next day ripping it out and cursing my over ambitiousness.

I would have done the same thing just to spite my mom. LOL. The market bags turned out really cute. I think i like the one with the fall colors on it

what a great idea!! I'll have to attack our bag stash.

Haha, I do work hard at annoying my mother but I think she does the same!